Are you a fan of eggplant? If you are, and you would like to know more about getting the best out of this unique veggie and how long you can keep for before it starts to lose its special characteristics, I am about to reveal all.

I cook with eggplant all the time. It is one of my all-time favorite vegetables. One of the eggplant recipes I wanted to try out was Eggplant Parmesan. But I only go shopping twice a week, and in between, I am always busy, so I wasn’t sure exactly sure when I would be cooking the dish and, therefore, for how long I would be storing the eggplant. 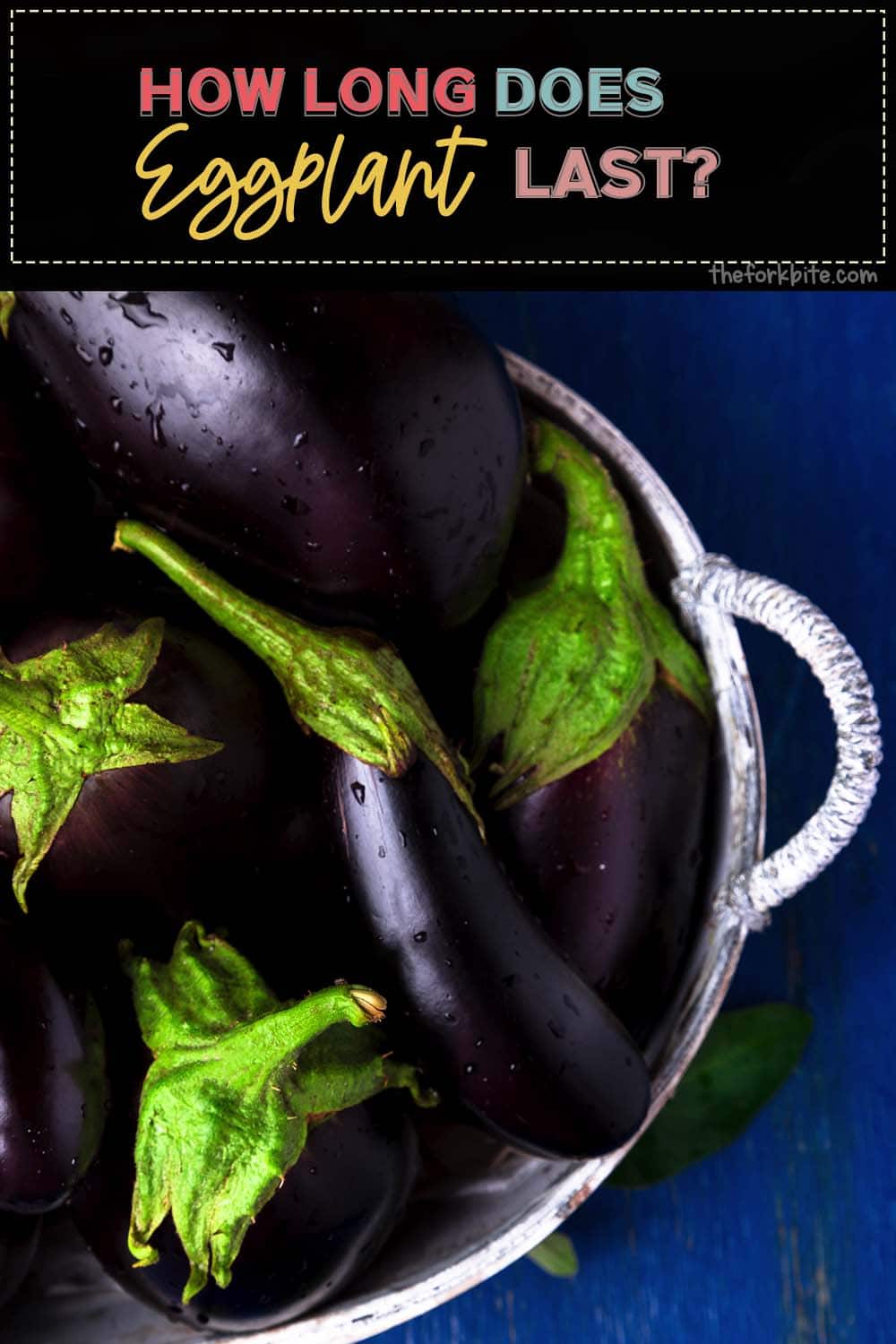 It meant that I needed to do a little research to make sure my ingredients would be the right quality for the job, and this is what I found out.

Fresh eggplant can be kept at room temperature for between three to five days. If you refrigerate it, you can keep it for somewhere from seven to ten days. You can also freeze it, and if you do it properly, it will keep its flavor as just as importantly, its texture, for as long as eight months.

But to give yourself the best chance of maximizing the length of time an eggplant will stay at peak quality, you need to know what you’re looking for when you buy it.

How long does eggplant last?

Here is a quick summary of how long an eggplant keeps its top characteristics in various storage situations.

For the most favorable results (short term), eggplants should be kept at 50° F.

Having found all this out, I then needed to establish how best to optimize these various storage options, and this is what my research uncovered. 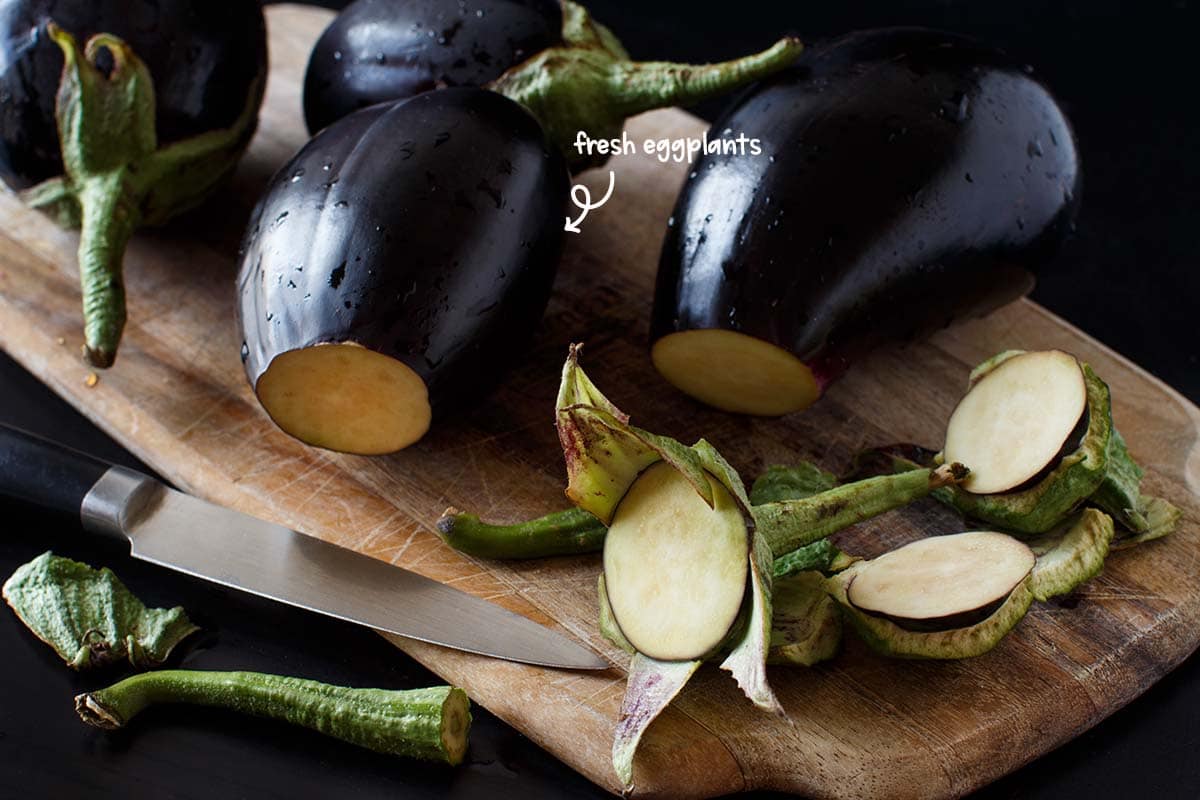 Should eggplant be refrigerated?

It is not strictly necessary to store eggplant in the fridge. It’s a bit like storing cucumbers. The natural reaction is to keep them in your fridge’s cold drawer, but according to the rootsimple.com website, it’s the wrong thing to do.

Storage-wise, eggplants tend to spoil more rapidly than some other fruits.

Oh, yes, I forgot to tell you. Although most people (including me, initially), think of eggplants as veggies, they are fruits. Even that is slightly incorrect as technically they are berries. Anyway, refrigerating them will significantly extend their shelf lives.

When I refrigerate eggplants, I usually put them in the crisper drawer of my fridge or on the lowermost shelf.

There is no doubt that eggplants taste better when you cook them straight away. Storing them in the fridge will prolong shelf life but may also lead to the skin turning darker, or soft spots appearing on the outer. Also, the flavor will degrade a little.

How long does eggplant last in the fridge?

Okay, so we know that storing eggplant in the fridge will last longer than just keeping it at room temperature – seven to ten days as opposed to three to five.

But why the spread in time? Well, it depends on two things – the size of the eggplant, and when it was harvested. However, with everything in its favor, eggplant can remain for up to two weeks in the fridge without serious deterioration. 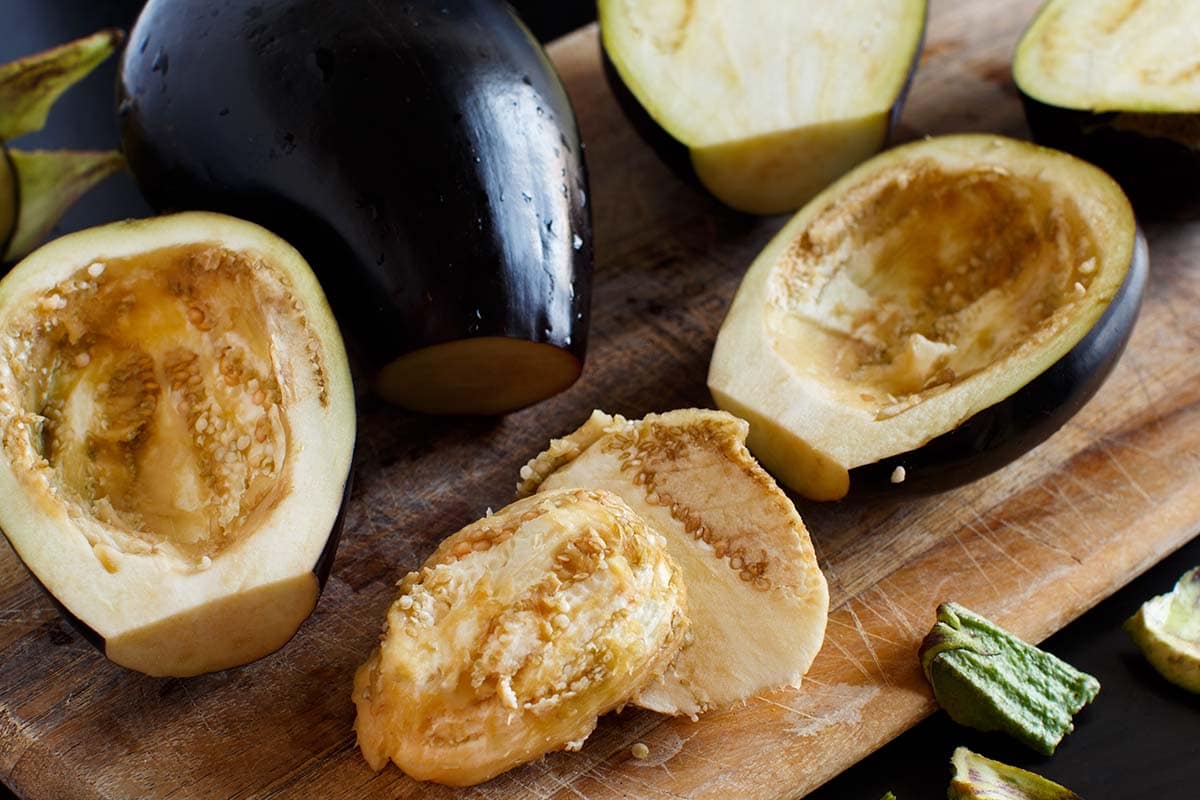 The best place to store eggplant

When it comes to retaining top quality, the best environment for storing eggplant is not a refrigerated one – but one where it is kept at room temperature. Here are some helpful pointers.

How long does eggplant last unrefrigerated?

When you store eggplant at room temperature, its shelf life will be shortened. A well-chosen eggplant will be okay outside the fridge for three to five days.

With such a relatively short shelf life, you need to know how to get yourself off to the best start by picking the best fruit from your grocery store, or preferably, a farmers’ market.

Buying the freshest eggplant means that it will last longer in the fridge and have a better flavor. Here are some useful pointers for finding the freshest.

If you’ve got one near you, go to a farmers’ market. You can check out if there is one in your area using the ams.usda.gov website. Leave aside any eggplants that have been wax coated. It is a trick used to make an eggplant look better than it is.

How long does eggplant last after cutting?

Without refrigerating, an eggplant will begin to turn brown around 30 minutes after it has been cut into pieces. You can prevent this by putting it into the fridge immediately after cutting, where it will keep fresh for up to three to five days.

What is the best way to preserve eggplant?

Freezing is the best way to preserve an eggplant. If that is your intention, follow these steps:

Eggplant will fare better when frozen if you blanch it before freezing. It will keep its integrity better than if you freeze it raw. Freezing it raw will lead to the water contained in its cells crystalizing, and this will adversely affect the eggplant’s texture, making it less pleasant to eat.

Some like to dehydrate eggplant. When it is dehydrated, it is often referred to as eggplant jerky or eggplant bacon.

In this form, it can last many months in a fridge or several weeks stored at room temperature. You can carry out this process using a dehydrator, or you can heat it gently in your oven, or salt and cure it.

How to properly store eggplant

Let’s just recap the three ways that you can store eggplant. In each instance, I assume you will have taken your time to pick a good, ripe fruit.

If the plan is to use the eggplant within three days of purchase or harvesting, you can keep it in a dry, well-ventilated environment at room temperature.

In summer, if you don’t have air conditioning in your kitchen, find a cool cellar or cupboard or pantry to store it. The best temperature for storing eggplant is between 50°F and 54°F, so opt for either a warm place in your fridge or a cool part of the house.

Avoid storing eggplants near ethylene producing fruits, such as tomatoes, melons, and bananas, as they will cause your eggplant to spoil quickly. Please store in a bowl or a basket and not cover them since this will also promote rapid decay.

Step 2 Storing in the fridge

The perfect way of keeping eggplant in a fridge is to wrap it in a perforated plastic bag or piece of cheesecloth and place it in your fridge’s crisper product drawer. Ensure it has enough room to breathe. Use it at the earliest opportunity.

Step 3 Storing in the Freezer

If you will be freezing out eggplant, slice it, blanch the slices, separate them with wax paper, or vacuum-sealed the rounds for longer shelf life. Then position the eggplant in the coldest place in your deep freezer.

How do you know if an eggplant has gone bad?

Regrettably, eggplants have relatively short shelf-lives. If yours has expired and it’s only good for the compost heap, throw it out. If it’s in good condition, its skin should be taut, its flesh nice and firm, and should have a green, moist stem.

Ways to tell your eggplant has gone bad

Here are the tell-tale signs your eggplant is ready to be discarded. 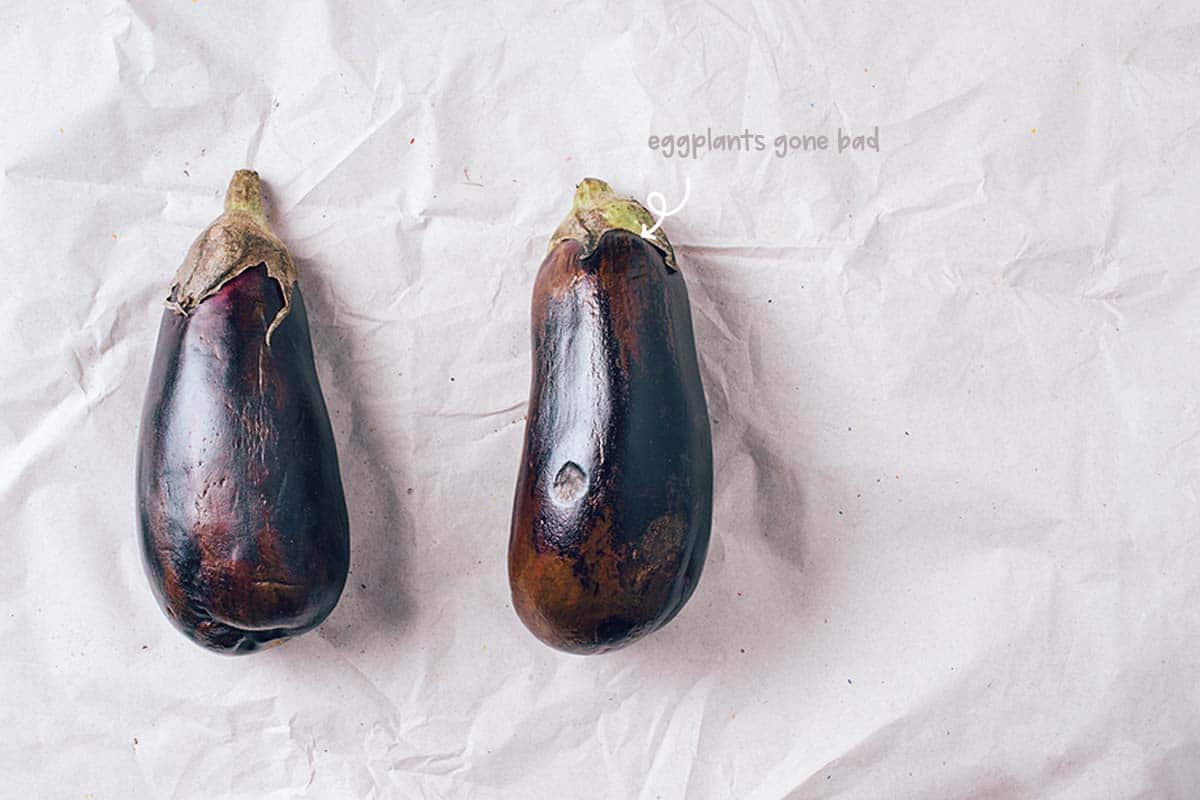 What happens if you eat bad eggplant?

Because the type of bacteria that typically form in rotting vegetables are not the sort to cause severe digestive illness, you are unlikely to suffer food poisoning by eating “off” eggplant.

As eggplants age, they tend to become increasingly bitter, so you probably won’t eat a rotten eggplant anyway, unless you’re into self-flagellation and stuff!