Home » Recipe » Can you Freeze Salami – Things you Need to Know

I have to admit that I am something of a Salami freak. I love the stuff, so much so that I sometimes get carried away and buy too much. To save having to throw it away, I thought I should check out the possibilities of freezing it.

Delicatessen meat, or deli meat for short, is one of the many delicious luncheon meat you can buy. Unfortunately, it has a relatively short shelflife. It can go from slightly moist and savory to slimy and unappetizing in a matter of days.

Most homemakers and home cooks are okay about freezing things like chicken breast or meat they intend to stew. But when it comes to salami, they are not as confident because it is processed deli meat. 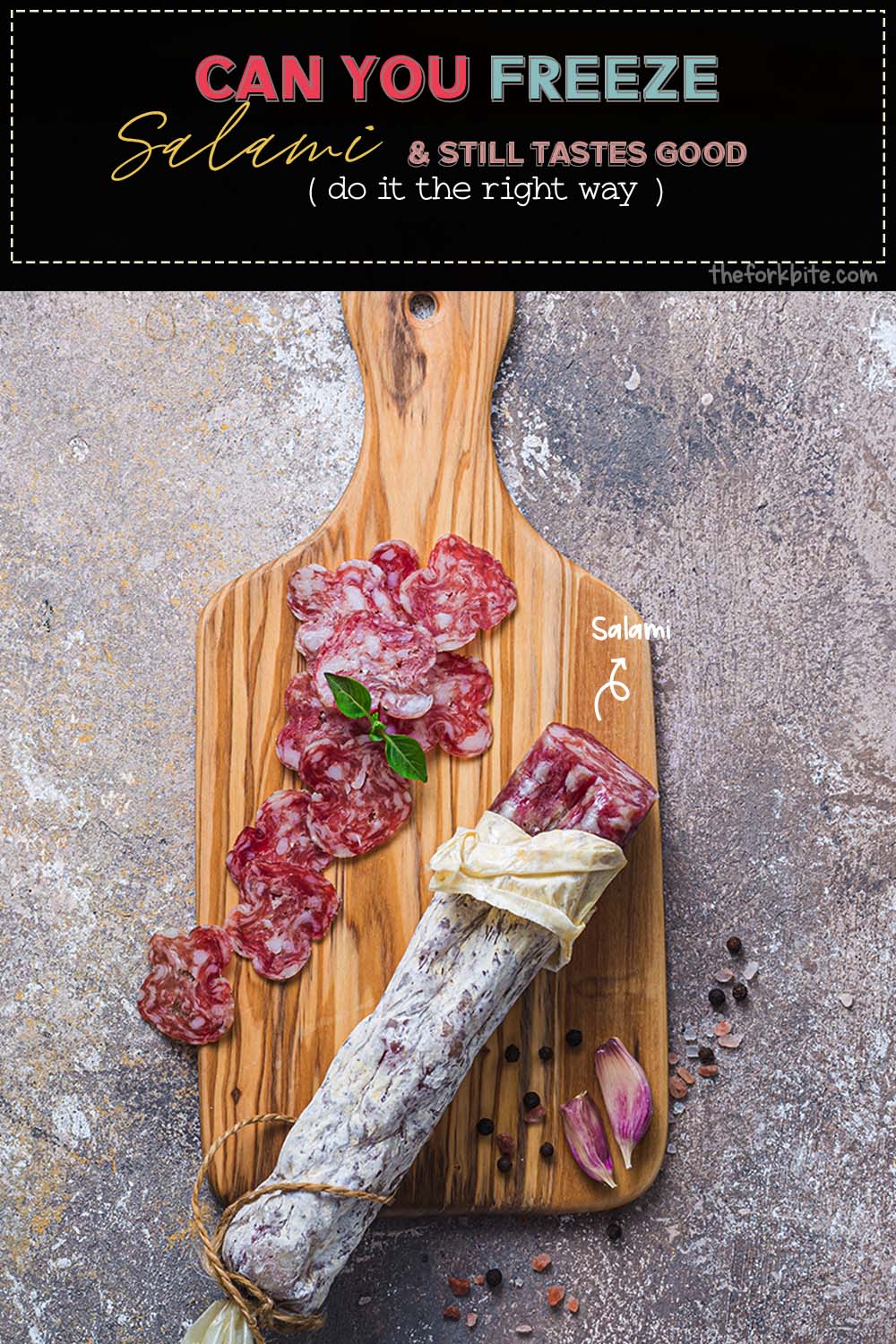 Having done a little research into the subject, I am pleased to tell you that the answer is yes. You can freeze deli meat for up to as long as two months providing you prepare and wrap it properly to preserve the texture and its moisture content.

Cured sausages like salami are very popular in sandwiches and added to other cooked foods like pizzas. When it is made, salami is a complete sausage form. It is encased in the skin and can be stored for long periods in the right conditions.

But when it is sliced, as it often is when sold prepacked in stores and supermarkets, once the packaging is undone, the salami inside becomes susceptible to bacterial growth.

As we all know, bacteria that grow on food can cause food poisoning, so, to prevent this, sliced salami needs to be handled correctly. Like many packaged deli types of meat, once the pack is opened, and even before bacteria appear, the salami’s flavor will begin to deteriorate.

The instructions I am about to give you for storing salami in your fridge or freezer will work for different kinds of dried, cured and uncured deli meats. These include soppressata, cacciatore, chorizo, and ciauscolo.

But before we get to that, let’s take a look at the different types of salami you might come across. 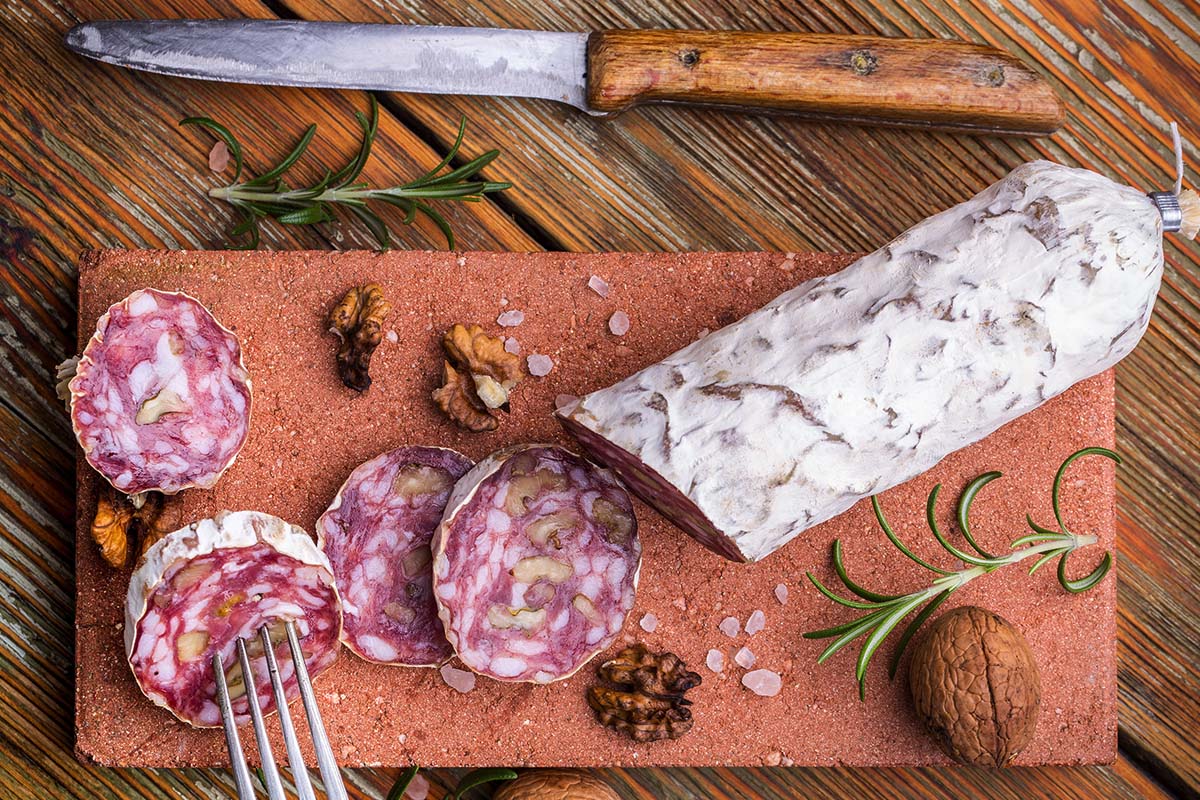 According to some of the kitchen gurus at Cook’s Illustrated, salami comes in three basic types – Hard Salami, Soppressata, and Genoa. All three are made from a mixture of raw, minced meat, salts and seasonings, which get forced into a container where they are left to ferment and dry until they are fully cured.

Can you freeze salami?

Yes, as I have already indicated, you can freeze salami. If you prepare it properly by wrapping it to avoid both dryness and excess moisture, salami, both whole or sliced, will last for as long as six months in a freezer and, when unopened, as long as six weeks in your fridge.

If the color changes or smells as if it has gone off, you should dispose of it.

Packages of dry or hard Salami that have been opened will permit bacteria to enter. Because of this, you should not eat salami that has been opened and stored in the fridge for more than a week.

Although salami freezes well, the texture will change a little. Because of this change of texture, you should never refreeze the meat once it has been thawed. 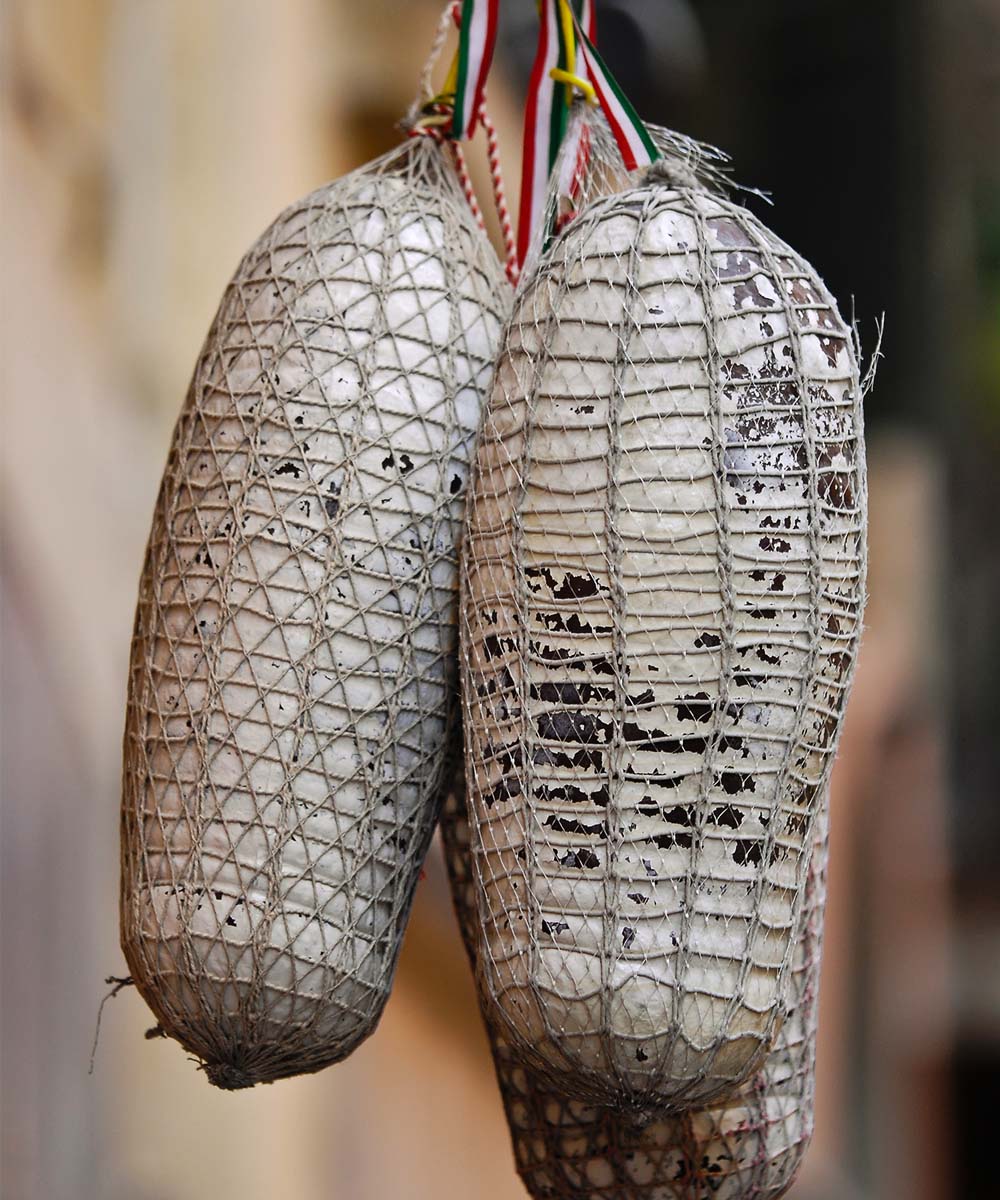 Ensure salami is refrigerated correctly before you first cut into it. It helps to prevent the meat from discoloring. If the meat is at room temperature when you put it into the freezer, the color will begin to change as the temperature gets to 32°. You will get the best results when you cut, wrap, and immediately freeze salami that is still fridge-cold.

How to defrost frozen salami

The best way to thaw salami before cooking is slowly in the refrigerator.

You can do it overnight if necessary. This is done to help make sure that the salami has less chance of developing harmful bacteria that can give rise to food poisoning.

It is possible to thaw deli meats in the microwave, but you must keep a careful eye on it. Remember that microwaves heat food very quickly.

Another way of thawing frozen salami is to immerse the complete package in a bowl of cold water. Whatever you do, remember that you must not freeze it again once it has thawed.

If you want to extend your salami’s storage life, you can choose to vacuum seal it. Vacuum sealed salami can remain edible for up to about three weeks.

How long can you keep salami in the refrigerator?

The ideal time to keep an opened pack of salami in your fridge is between five to seven days.

Once the pack has been opened, use a cling wrap or put it into an airtight container to extend its shelf life when kept in the fridge. It needs to remain refrigerated all the time. If you do take it out, and it is left at room temperature for more than two hours, the salami will become unsafe to eat and should be thrown away.

Bacteria will grow on any food kept out at a temperature between 4°C and 60°C. That being the case, it is best left in a refrigerated environment until you are ready to eat it, and it is best if you consume it straight away – certainly within two hours.

Keeping well-wrapped salami in an airtight container will help to ward off any moisture and any other unwanted contaminants. 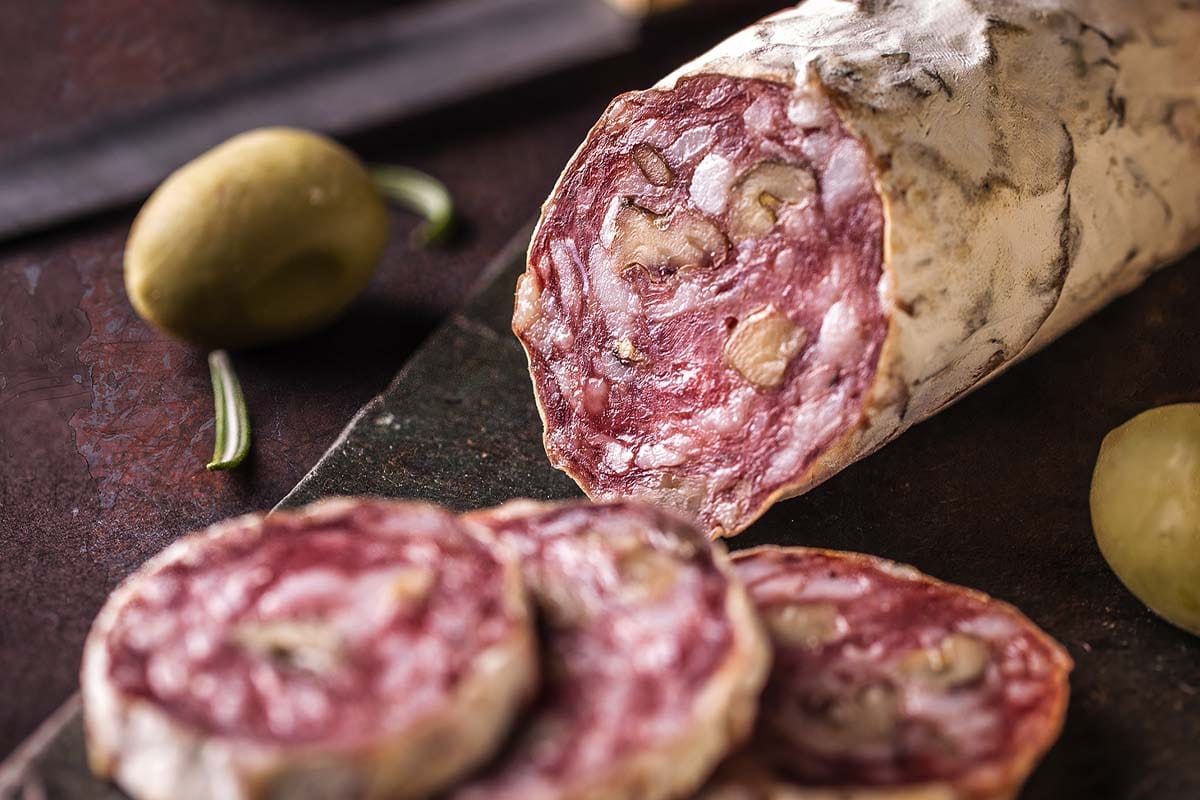 How long can you keep salami in the freezer?

You can extend the shelf life of salami considerably by wrapping the pack and putting it in the freezer. When installed correctly in your freezer, salami will be safe to eat anywhere from one to two months.

It can stay safe beyond this timeframe, but I would recommend eating it within this duration for the best enjoyment.

It is best to freeze salami while it is as fresh as possible. Freezing it after it has sat in your fridge for between five and seven days, for example, is not to be recommended.

It’s best to keep deli meat in the freezer in its original packaging, wrapping it in cling-film, aluminum foil, or freezer paper, or putting it into a freezer bag airtight container.

Most luncheon-type meats can be stored in a freezer for up to two months. Beyond this, both the flavor and texture will begin to deteriorate. Cured meats, however, will remain tasty for as long as three months.

How long can salami sit out?

As I have already indicated, salami will not be safe to eat if it has been sitting at room temperature for more than two hours. However, hard salami is reasonably shelf-stable.

It means that it can sit encased in butcher or wax paper for as long as you like, providing the wrapping remains intact, and the meat is kept away from excess moisture.

Salami can dry out quite quickly, which might lead to it “sweat,” but this will not detract from its taste or quality.

How can you tell if salami is off?

The tell-tale signs that salami has gone off are its smell and its appearance. If it develops a slimy service, a horrible smell, and it looks unappetizing, don’t even try to eat it. Put in straight into the rubbish bin.

Which deli meats can you freeze?

You can freeze all delicatessen meats virtually. This includes Bologna, salami, and sausage, all of which are cured meats and tend to freeze best owing to their density, their firm texture, and the fact that they have low water content.

Freezing other meats like chicken, ham, roast turkey, and other delicatessen meats are still quite achievable, although the meat may be quite wet when it defrosts. There are some tips about dealing with this below.

It is possible to freeze luncheon meat in larger slices or chunks. However, it is prepared for freezing; it’s better to enjoy it at its best, as all meat should be consumed as soon as possible once it has been frozen.

How to prepare deli meats for freezing

Pre-packaged meat is best frozen when it is still in its original, unopened packaging. All you have to do is toss it straight into the freezer.

However, to avoid freezer burn, you can take the precaution of wrapping it in an additional outer layer – something like a plastic grocery bag or aluminum foil. If the meat was bought sliced from the butcher or in a package that has been opened, it should be wrapped.

How to defrost deli meat

The safest way of thawing deli meat is to transfer the entire pack or as much as you want to eat into your fridge.

After completely thawed, meat can then be stored in the fridge for up to three or four days.

If the meat has started to shred or some of its flavors have disappeared, don’t worry. You can still use it by chopping it into pieces and putting it into a casserole or vegetable skillet or even use it as a pizza topping. You’ll be surprised.

With a little bit of heat and the addition of some seasonings, you can make your meat quite edible once again.

What it all boils down to is that if you should come across a great deal that your local store is running on luncheon meat, or you want to store some leftovers to use at a later time, delicatessen meat is eminently reasonable.

Is it okay to freeze cold cuts?

Yes, it is. One of the many things I love about salami is that it will last longer than most delicatessen meats on sale today.

Indeed it is. Pepperoni is a kind of salami which is often made with a mixture of beef and pork. It gets its distinctive red color from the paprika that is added to it.

You can thaw frozen pepperoni in your fridge. Other types of dried, unopened, packaged, sliced salamis, or whole salami sausages still in their skins, are safe to store in your pantry. They will last for approximately six weeks.

Beyond that time, to prolong its life even further put it in the fridge. If you have a strong-smelling salami, you may prefer to keep it stored outside the refrigerator (so it doesn’t contaminate other foods with its smell), loosely covered at room temperature for up to 5 days.

How to package salami before putting it in the fridge

Salami has to breathe, but it mustn’t dry out. That is precisely the reason that butchers and delicatessens store their salami by hanging it from racks.

To prevent it from drying out at home, you should wrap salami in butcher or wax paper. A lesser preferred alternative is to wrap it in a plastic bag or container. The best thing to do is vacuum seal it to evacuate all the air from inside the plastic bag, and it will remain in good condition for longer.