This bread reminds me a bit of the potato we used to make for a campfire or for those of you with an even fancier palette, Hasselback potatoes.

The potatoes were sliced partially through and then cheese or onion slices—or both—were put in between those partial slices with butter. 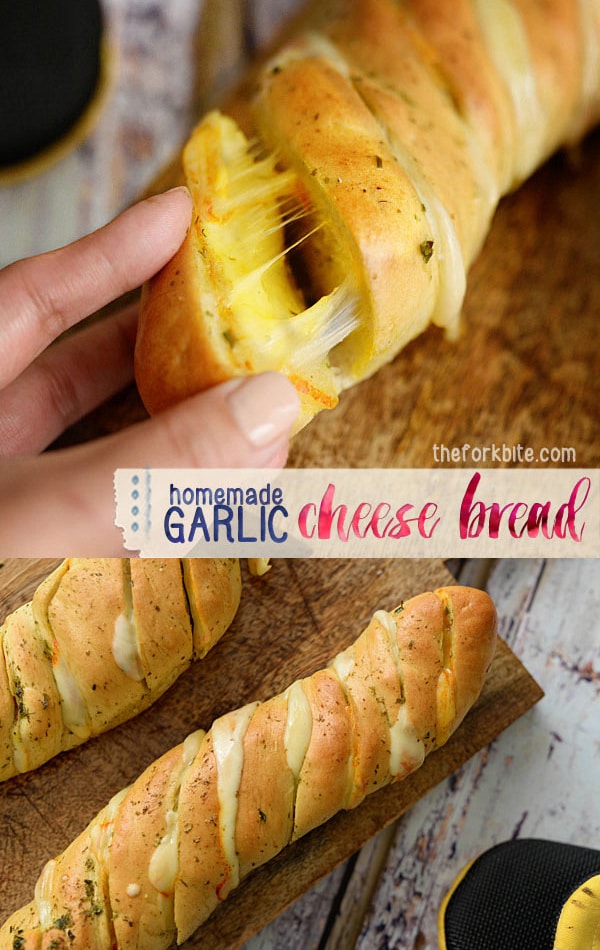 They were wrapped in foil and thrown into the fire to cook. Of course, Hasselback potatoes don’t stuff the slices, but they both look similar when done. The garlic cheese bread will have that same stuffed appearance when you’re done.

You can make your own French bread or purchase a loaf you can simply pop in the oven. If you make your own, use a recipe that’s a bit sweeter, such as one containing honey. I make up several batches of bread dough and freeze it in loaves so it’s always ready. 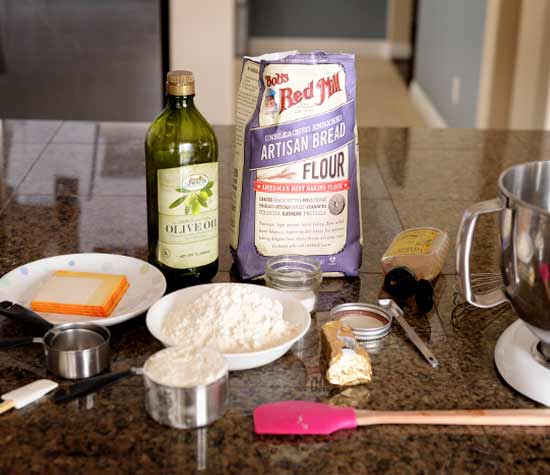 You do have to use cake yeast and double the amount you use to compensate for the yeast that dies in the freezer. It lasts in the freezer for a month.

If you use frozen bread dough, let it thaw first. Form a French loaf, but twist it, so as it rises it stays just as long as you originally planned, otherwise it tends to pull together for a shorter fatter loaf. Bake it almost until done and remove from the oven to brush with melted herbed garlic butter. 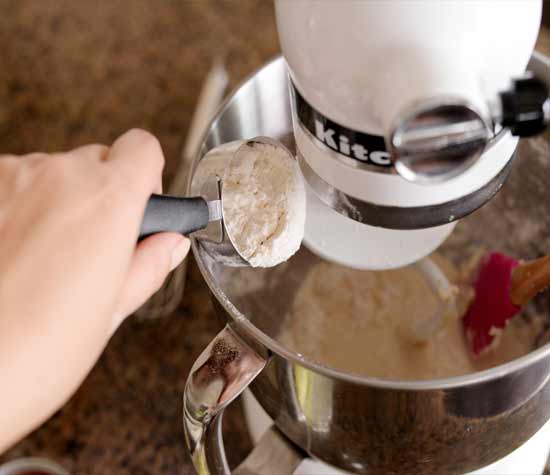 You can purchase this at most stores or make it yourself. You just combine butter with minced garlic and any herbs you like; I love chives with mine or basil, then mix thoroughly.

You can even freeze it and cut off whatever you want when you need it. Bake about seven minutes longer. 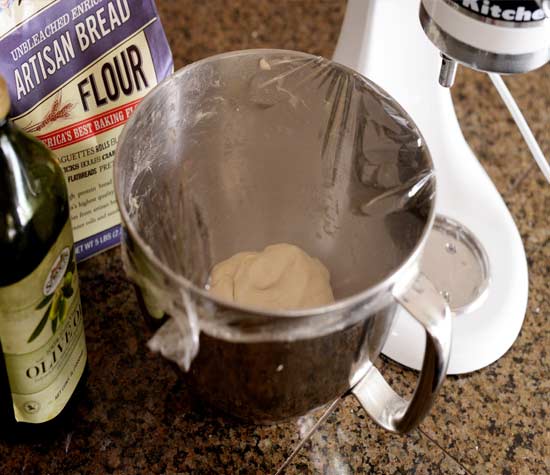 Brush the insides of the slice with more melted butter and stick a slice of your favorite cheese into it. 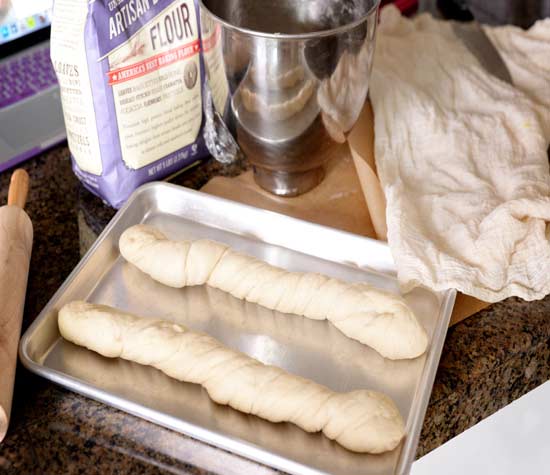 Return it to the oven for a few minutes to melt the cheese. I’ve often thought of wrapping the bread in foil and putting it on the grill for the final step to get that same smoky flavor I get from the potatoes, but let’s face it, it might not work well and it would be a horror to lose a loaf of this because of experimenting. 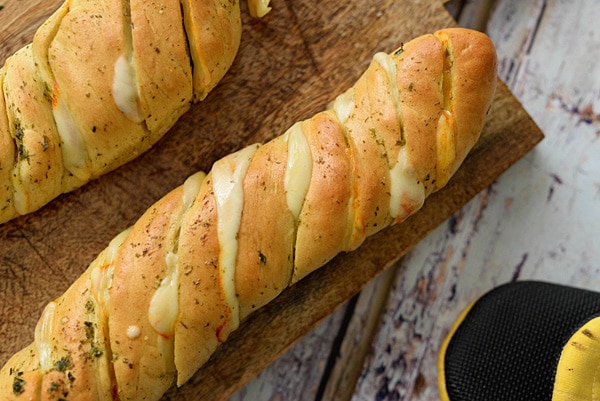 Make up two at a time because you’ll need it even if you have a small family. I justify my consumption of this delectable bread by using butter and cheese from grass-fed cows, making it a health food rather than an indulgence. 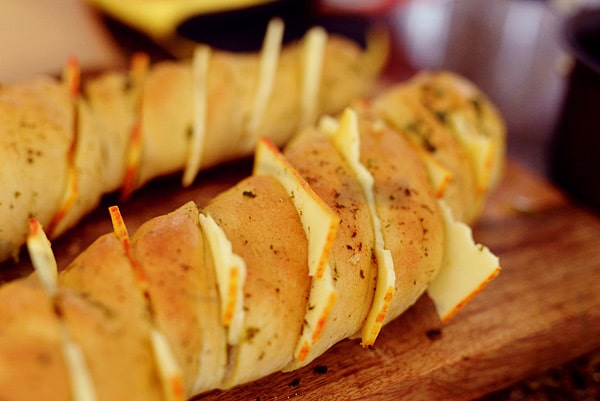 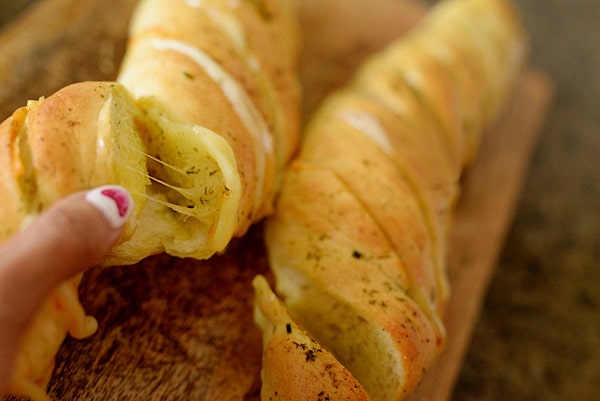 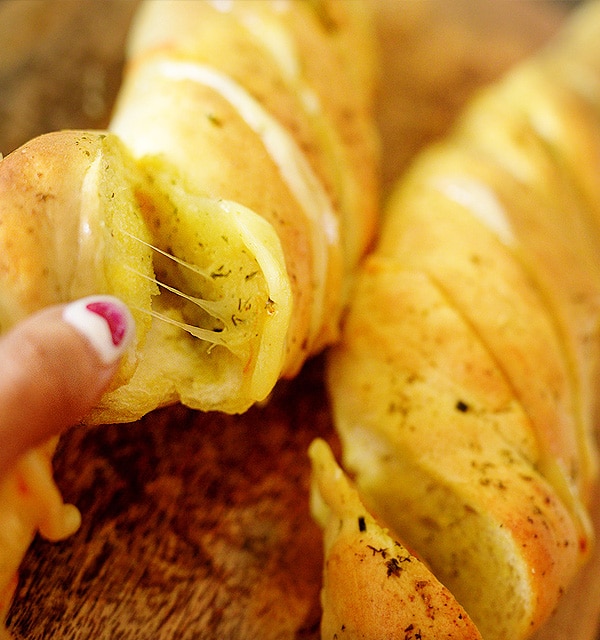 This cheesy pull-apart bread is one of our favorite appetizers. So easy and super delicious - make sure to keep those napkins handy for the second rounds.

* Percent Daily Values are based on a 2,000 calorie diet. Your daily values may be higher or lower depending on your calorie needs.