Home » Recipe » what is the Difference between Blanching and Parboiling

Jump to Recipe Jump to Video

Do you know the difference between blanching and parboiling? They are both culinary terms that we often use, but they are two different processes, designed for separate outcomes.

If you would like to know exactly what they are and why they differ, please read on. You will learn something that will improve your cookery skills.

Many people use the terms blanching and parboiling as if the processes they refer to are interchangeable. Yes, they are similar but interchangeable? Certainly not.


Cooks and chefs often use the parboiling technique to pre-cook food items that will later be cooked differently, such as boiling, grilling, stewing, or stir-frying. A typical example would be parboiled rice.

On the other hand, Blanched food is uncooked, or mildly cooked product as opposed to parboiled foods that become pre-cooked products.

Both of these culinary techniques are interconnected and are used by home cooks and professional chefs alike.

As we delve deeper into this article, the difference will become more apparent.

Blanching is a process whereby food is dropped briefly into a pan of boiling water, typically for one or two minutes just past the raw stage.

As soon as the food is taken out of the boiling water, it is immediately plunged into iced water to cool it rapidly and stop any more loss of nutrition.

It is a technique used in home cooking and industrial food processing.

Sometimes, vegetables that have been blanched may have to be squeezed to remove excess water before eaten.

Fruits and veggies that are eaten raw or going to be put into salads are often blanched.

This same process can also be employed to remove bitter tastes from food and make vegetables softer before roasting them.

Difference between blanching and parboiling

The difference between parboiling and blanching is that with parboiling, the food is not cooled rapidly after being taken from the boiling water.

You can refer to the infographic below for the difference between the two processes in cooking.

Shocking (Cooling) is the name given to the process of plunging the just-blanched foods into iced water to bring an immediate stop to the cooking process.

It is the part of the blanching process responsible for retaining color, vibrancy, and keeping the texture of the veggies lovely and crisp.

When done correctly, blanching preserves color, flavor, texture, and nutritional content. It softens the exterior of the food, maintains crispness to the interior, and imparts a little sweetness.

Blanching fruits and veggies can be done in three different ways – boiling, microwaving, and steaming. Each method is straightforward and only needs the simplest utensils and boiling water.

Begin by prepping the produce following a recipe or to your personal preference.

Find a microwave-safe dish and place the fruit or veggies into it.

1 Although you might be tempted to forgo the ice water bath treatment, don’t. It is critical because it prevents further cooking, and maintains the food’s color and texture.

2 The majority of recipes will tell you to salt the boiling water. Salting adds to the veggies’ flavor,  it also lessens the loss of the foods’ salts and sugars that would otherwise leach into the water.

3 The quantity of salt you should add is debatable. I normally add 2 tbsp of salt for every quart of water.

The salt adds flavor to the veggies while raising the boiling point of water hence, cooking them faster.

4 Once the food has been added to the boiling water, it must be brought back to the boil within a minute.

When it takes longer to return to the boil, it is an indicator that either there is too much food for the quantity of water, or that the pan is overlarge.

5 If you are blanching to remove the food’s skin easier, cut a shallow x into the bottom of the fruit to start the skinning off.

Food keeps cooking even after you have taken away the heat source. It means that the fibers continue to soften, the colors carry on losing their pigmentation, and the enzymes become inactivated, lowering the nutritional value of the food.

The technique of immersing the just-blanched food in an ice water bath is termed “shocking.” It totally stops the cooking process and all of the associated effects.

Using iced water produces the best cooling effect, even if you only add a few ice cubes from your fridge. In a worst-case scenario, you can also use cold tap water, but make sure that it is as cold as you can get it.

Leaving food in an ice water bath for too long will result in the food becoming soggy.

That is why it should be removed as soon as it has cooled and then be patted down to dry thoroughly. If you do not dry it properly, it will turn soft and squidgy.

The length of time you should blanch food depends on the food type, its size, how much of it there is, and whether or not it has been cut. Most fruits and veggies are relatively delicate.

Overcooking them can lead to losing their color and texture – even overcooking them by as little as one minute can be catastrophic. It means that it is essential to stick to the recommended timings.

Should the pot be covered or uncovered after adding the vegetables?

Some schools of thought maintain that the lid should be kept off to prevent trapping vegetable acids in the blanching water. This could turn the veggies brown.

However, after test blanching broccoli, broccoli rabe, and green beans, both covered and uncovered, we found very little difference.

The water’s pH level was the same, and there was no difference in the look or taste of the veggies, whichever method was used.

The word parboiling or par-cooking is very often associated with parboiled rice. In most instances, parboiling something is to speed up its cooking time when it is going to be cooked again later.

With parboiling, the food is immersed into boiling water and cooked until it begins to soften, but it is then removed before becoming fully cooked.

In most instances, parboiling is used to partially cook or pre-cook food items that will later be cooked differently.

The difference between parboiling and blanching is that with parboiled or par-cooked, vegetables are boiled the same process but cooked completely to the al dente stage. 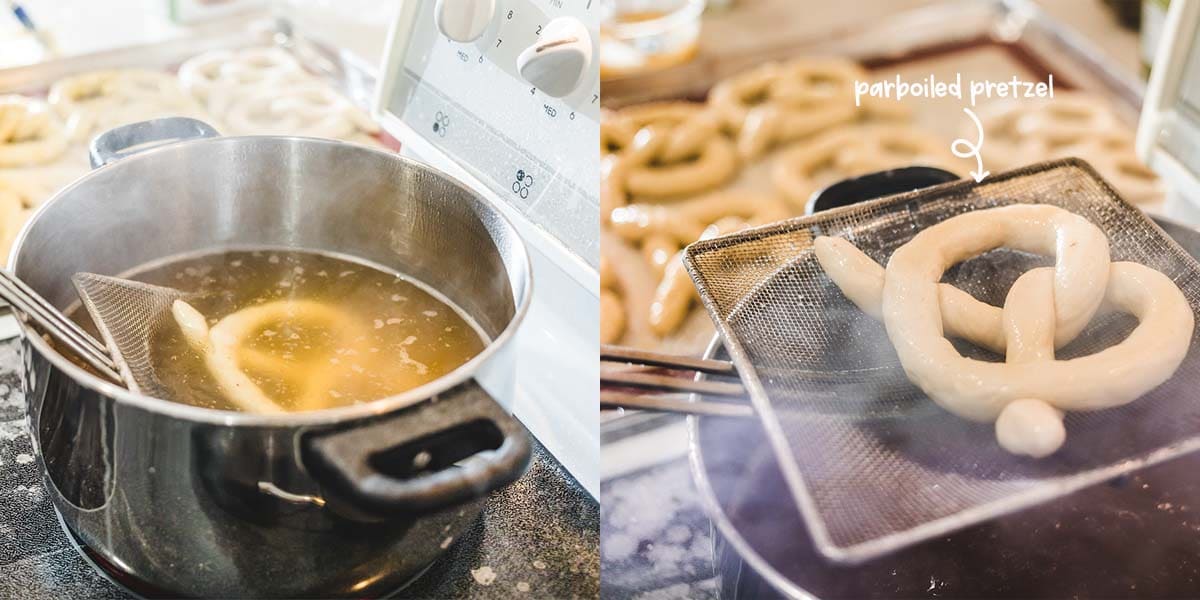 When raw rice or paddy gets parboiled, the white rice takes on a reddish hue.

Around about one-half of the planet’s paddy production is parboiled.

It is a process that is carried out in Asian and African countries, including the likes of Bangladesh, Guinea, Malaysia, Myanmar, Nepal, Nigeria, South Africa, and Thailand.

Parboiling is not a complicated process. Just follow these easy steps.

Going by my own experience gathered during the testing processes, the most critical thing with vegetable blanching is the ice water shocking. It has more effect on the final product than anything else.

When it comes down to texture, the amount of water you use, how long it took to come back to the boil, and how salty the water was, is nowhere near as important as getting the food out of the boiling water at the right time.

The human error factor will have a much more negative outcome on the process than all the other elements.

The other thing I found is that salt, and a generous amount of it adds to the flavor. Also, the texture is slightly better in my book when you boil at the highest temperature you can.

It means that it is more advantageous to use a smaller pan to get back to the boil that much quicker.

How to Blanch Vegetables (How-To)