Jump to Recipe Jump to Video

Here’s a foolproof way to get this crunchy, Double Dipped French Toast recipe hot off the griddle and bursting with cinnamon flavor.

Growing up, French Toast was arguably the dish of my childhood. I love it because it’s decadent, filling, and comforting — it is practically served on our Sunday brunch after church.

I can still imagine a platter of French toast dusted with powdered sugar and garnished with fruits and a plastic bottle of syrup.

It was kind of dessert we washed down with something bubbly that can be cloaked in fruit juice and serve in flute. 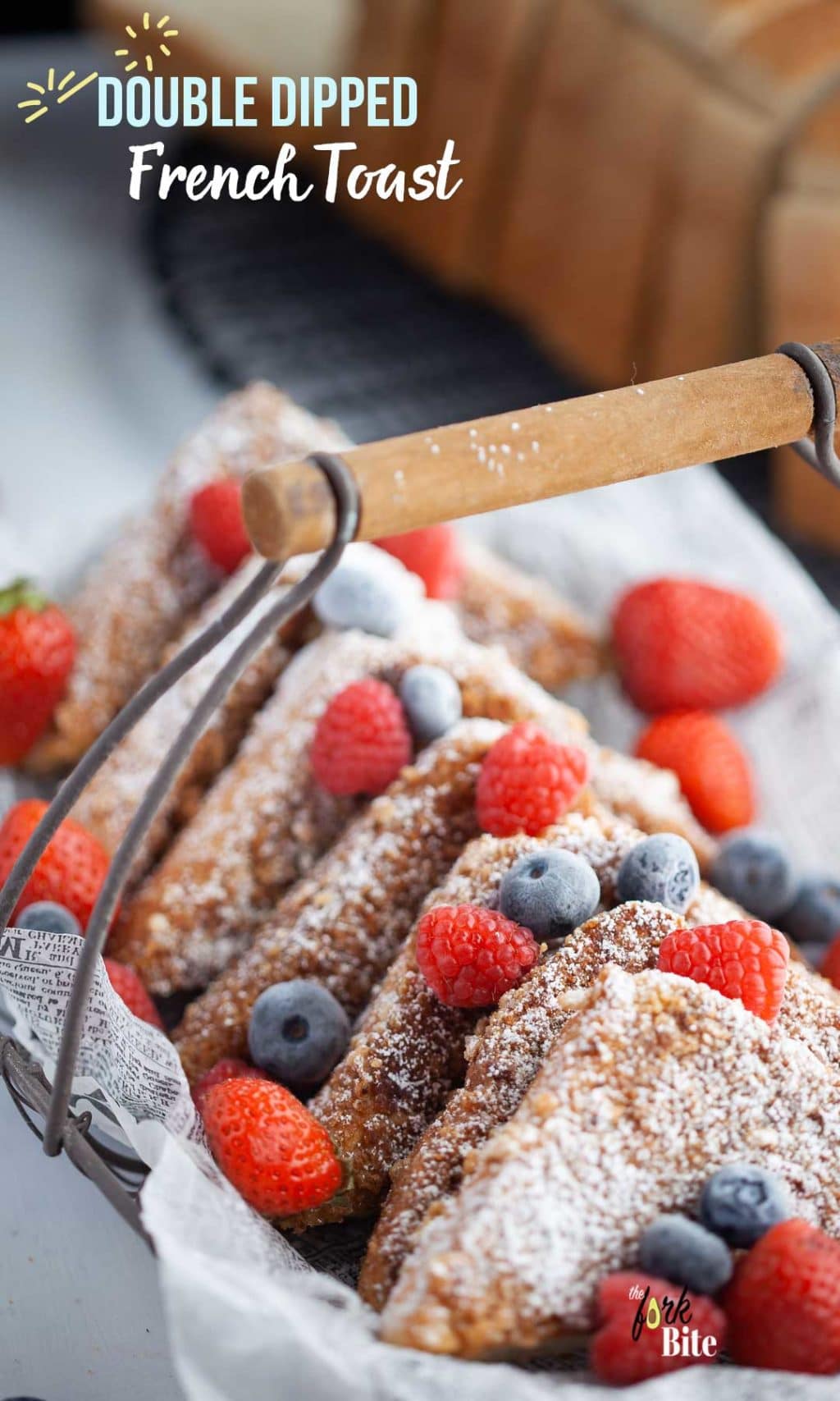 You may wonder why this is known as a unique weekend dish: there are some practical reasons for that I guess since, for one, it requires multiple steps, prep, and cooking time.

Plus, getting a post-meal downtime surrendering to carb and sugar-induced coma on the couch is so real.

But the only downside, IHOP offers this double dipped french toast on a seasonal menu.

Therefore, I was determined to make it at home and every time my cravings kick in, I can eat it whenever I want.

The origin of French toast was been traced back to the Roman Empire, however, the name “french toast” was used in 17th-century England. The recipe — and name — were brought to America by early settlers.

In France, people made French toast from stale bread to avoid wasting the leftovers that would otherwise have been thrown away.

That’s why the French called this “pain perdu” which means, “lost bread”. 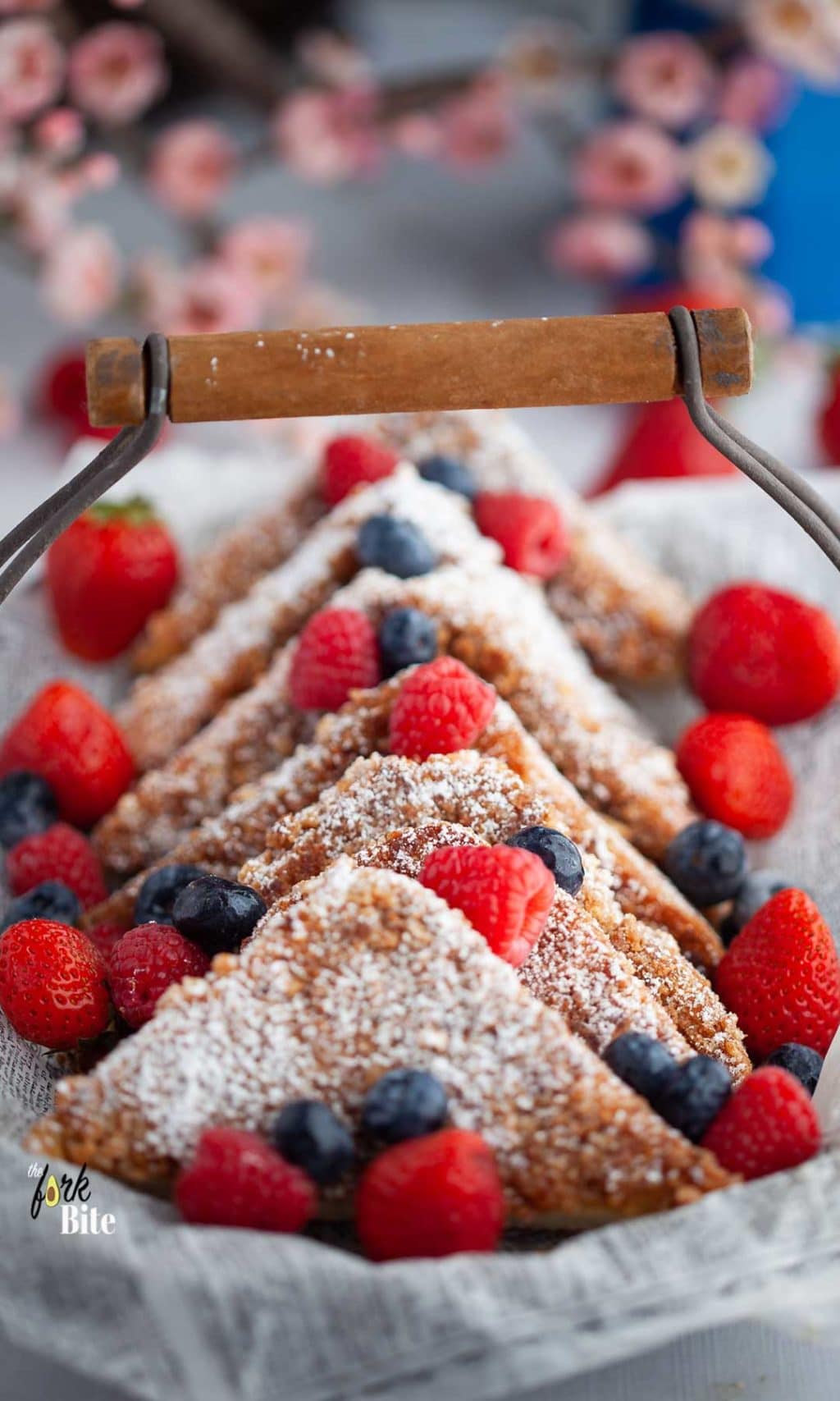 Why is my french toast soggy?

Have you ever had a French toast or just the regular one? French toast is a popular and delicious breakfast item.

The basic recipe has improved over time because of creativity and endless yearning for flavor combinations.

As my homage to the original French toast, here are some essentials in making the perfect batch.

The ideal French toast for me (or for anyone) is definitely NOT soggy. I want its surface to be dry and the edges slightly crispy.

Factors why is my French toast soggy

1 Adding too much dairy and sugar

Take note that the milk you add to the custard should not be more than the number of eggs.

Adding more milk than eggs to the mixture won’t allow the custard to cook. In the end, you will have a soggy French toast.

You don’t need to make the custard sweet either. After your French toast is cooked, you will be dusting it with powdered sugar or topping it with maple syrup or honey.

Be sure to whisk the custard mixture well so that the spices, milk, and eggs are combined thoroughly.

No one wants pieces of egg white appearing on your browned French toast slices. 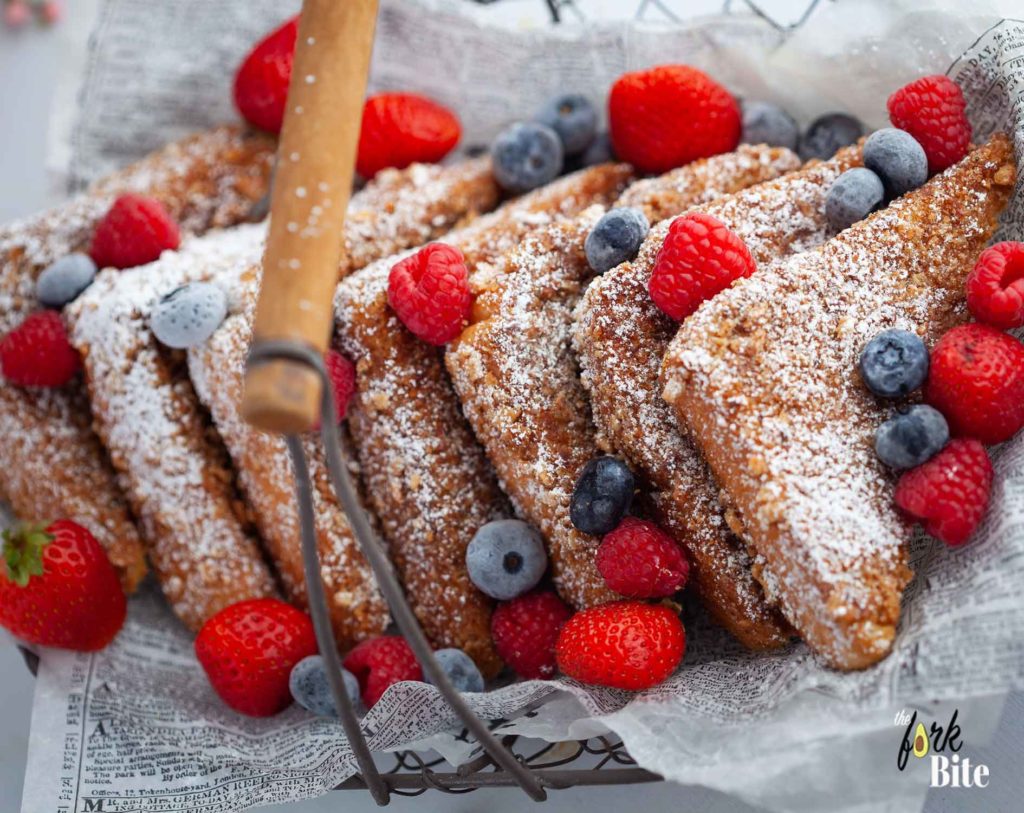 3 Not choosing the right bread

Similar to bread pudding, French toast absorbs the custard to have that creamy interior and a bit of a crunchy exterior.

Choosing the right thickness and type of bread is vital to achieving the perfect French toast.

Remember to select bread slices that are ¾ to an inch thick.

Challah or brioche are the right kinds of bread for French toast. This is mainly why they’re always included in the brunch menus.

After some bread trials, I have also discovered that Texas bread is also ideal.

Can you store french toast in the fridge?

Do you want to make French toast in advance? Did you happen to make too many slices of French toast this morning?

Don’t worry. You can store French toast slices in the refrigerator for about two days.

You should put the excess in the fridge not more than two hours after cooking. Wrap them in Ziploc bags, foil, or plastic wrap.

Doing so will keep your French toast moist and fresh. 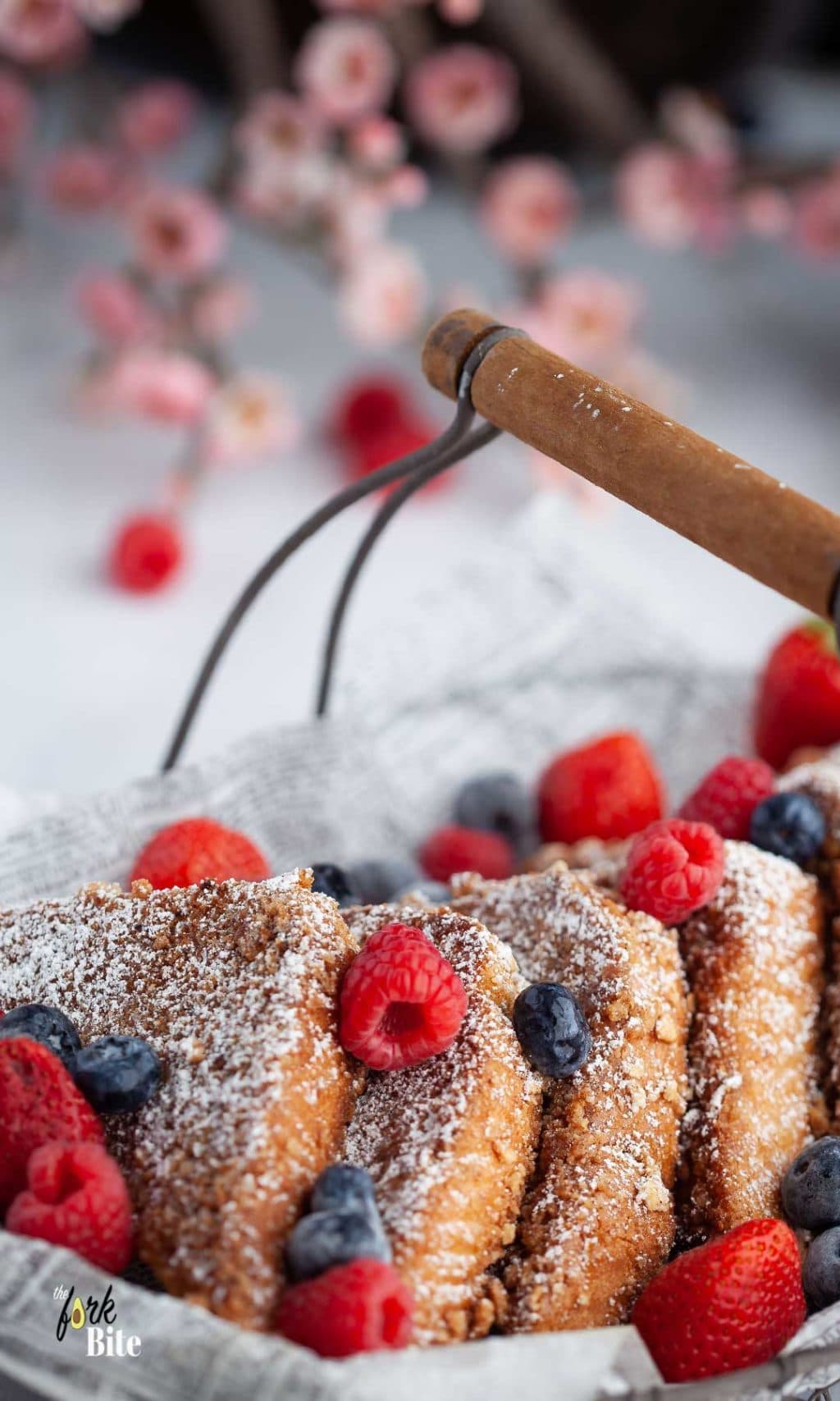 Many experienced home cooks just dip the slices of bread quickly in the custard they whipped up before tossing them into the hot, buttered pan.

Always remember that the bread slices need to be soaked completely in the egg and milk mixture. This will result in a creamy center.

One minute per side is enough time.

Using too much heat or not enough heat

Remember that when you are cooking French toast, you are not cooking steak. Scorching the surface is not ideal.

The sugar in the custard will caramelize. If left cooking on high heat, it will burn immediately.

Cooking French toast over high heat will leave the inside soggy and uncooked.

If you cook it over very low heat, the entire bread will just dry out and you will not have that signature soft center.

For the Goldilocks French toast, cook each side for 3 to 4 minutes on medium to medium-high heat.

Not pre-heating the pan

A pan that’s not hot enough will not cook the first slice immediately. Instead of forming up, the custard spreads off the slice. This results in irregularly shaped slices.

If the pan’s temperature is right, the batter doesn’t run. The eggs in the custard will start cooking immediately, the moment it hits the hot pan.

How hot should the griddle be?

The right temperature for cooking delicious French toast using your griddle is about 350° F.

When using butter only

Get your pan and coat it lightly with cooking spray. Then, add the butter. The oil helps prevent the butter from burning.

After every slice, wipe out the pan and start again. If you don’t do this, black particles will just stick to the next slices.

***For the double dipped French toast, a coating of cooking spray will help keep the butter safe from over-browning or burning. 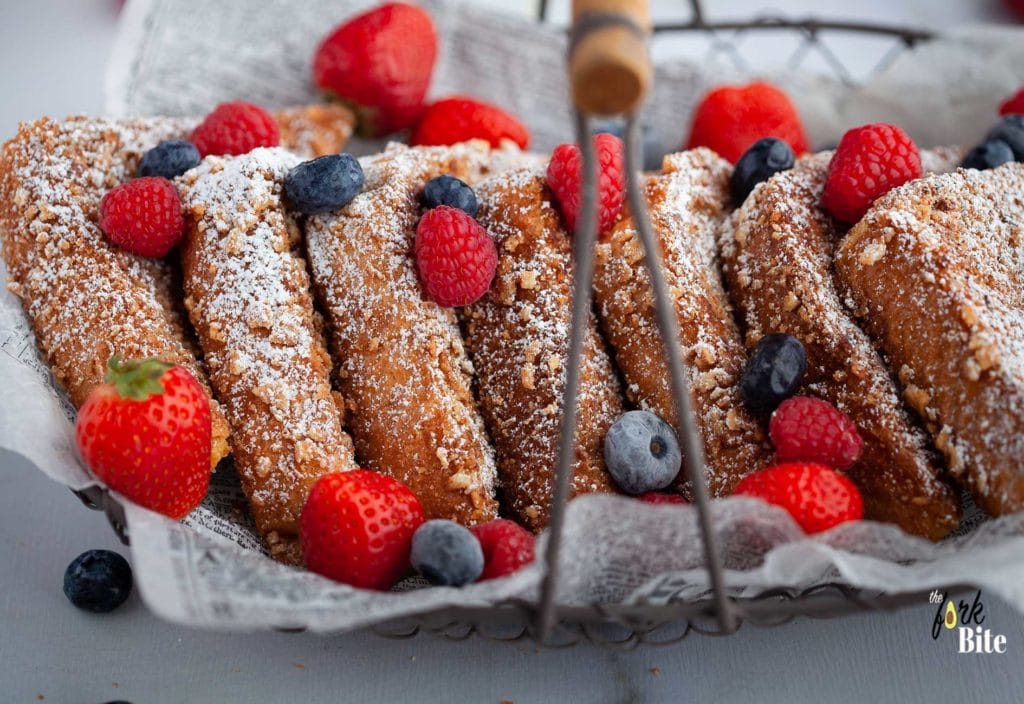 How dry should the bread be?

It’s a great idea to use dry bread because it prevents the center of the bread from being soggy.

The ideal dryness of the bread for French toast should be a bit stiff and have the texture of stale bread.

How to dry out bread?

How to Make Bread Stale for French Toast.
If you want to create your dry bread faster for your perfect French toast, here are two effective methods you could try:

Sourdough bread is good for making French toast because it’s strong in texture and can hold up to the custard.

Yet, this bread is not for everyone. It has a distinctive flavor that only bread lovers would like.

If you’re one of the fans of sourdough bread, you will love sourdough French toast.

Can you make French toast without using milk?

If you are Lactose intolerant or on a special diet, you may skip the milk in making your French toast.

But don’t worry. You can make this a decadent dish without a drop of milk or cream. Just note that removing milk will make your French toast denser.

Alternatively, you can simply replace the milk with a dairy-free option. Soya, almond, and even coconut milk – all make good alternatives and can still result in really yummy French toast. 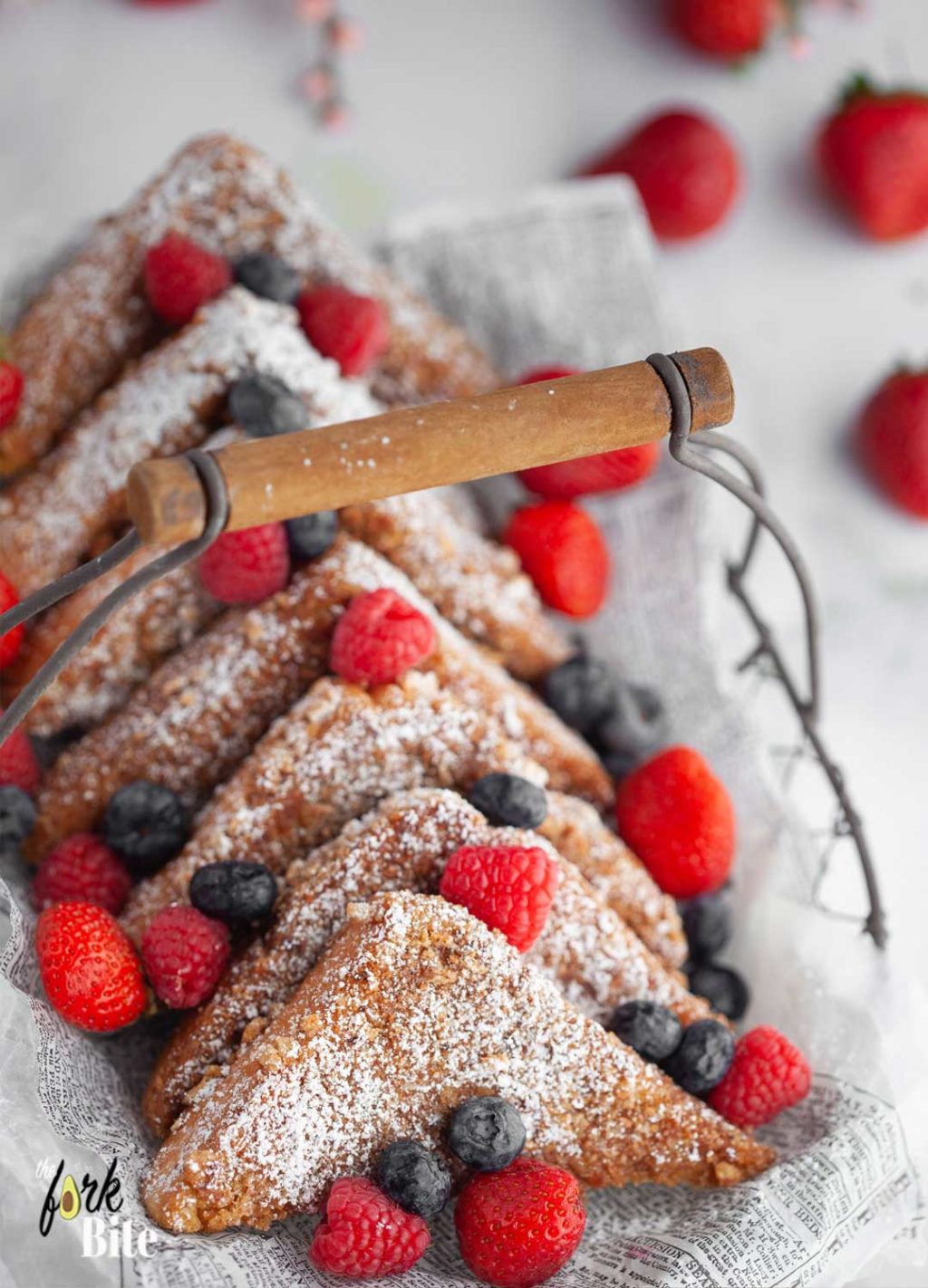 Can you use evaporated milk in place of milk?

For even richer French toast, you can use sweetened condensed milk. It will work best if you will have more sweet elements to your French toast recipe.

Take note that evaporated milk will add a lot more calories to your French toast. You may have to save this as a special dessert.

Can I freeze it?

Make sure to cook your French toast first before you freeze them. Just don’t leave it on the counter for more than two hours or so.

You can store French toast in the freezer for one to two months. Longer than this would affect the texture and flavor.

Can you freeze the batter?

Yes, you can, but there’s really no need to because making a batter for French toast is really quick. If you have excess batter, you can freeze it.

Make sure you place the batter in an airtight food container.

These are all important pointers if you want to make either French toast or double-dipped French toast.

If you haven’t tried double-dipped French toast before, perhaps it’s about time to try this recipe for it.

1 Gather the ingredients for the custard mixture. In a separate bowl (like a pie plate or a shallow dish), mix the eggs, heavy cream.

Add the cinnamon, vanilla extract, and a pinch of salt. Mix well using a fork or a hand beater. 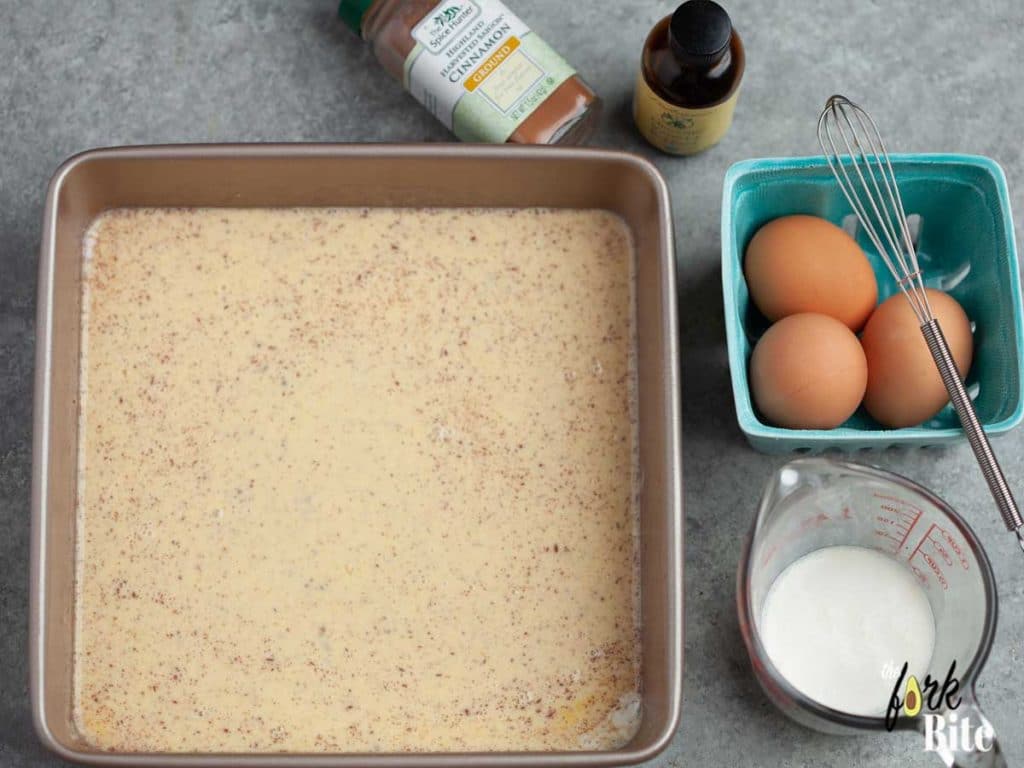 2 Cut the bread into thick slices (but skip this process if you’re using the Texas bread as I did in this recipe) and place in the custard mixture.

Soak well on both sides for about 1 minute, allowing the egg mixture to absorb the bread. 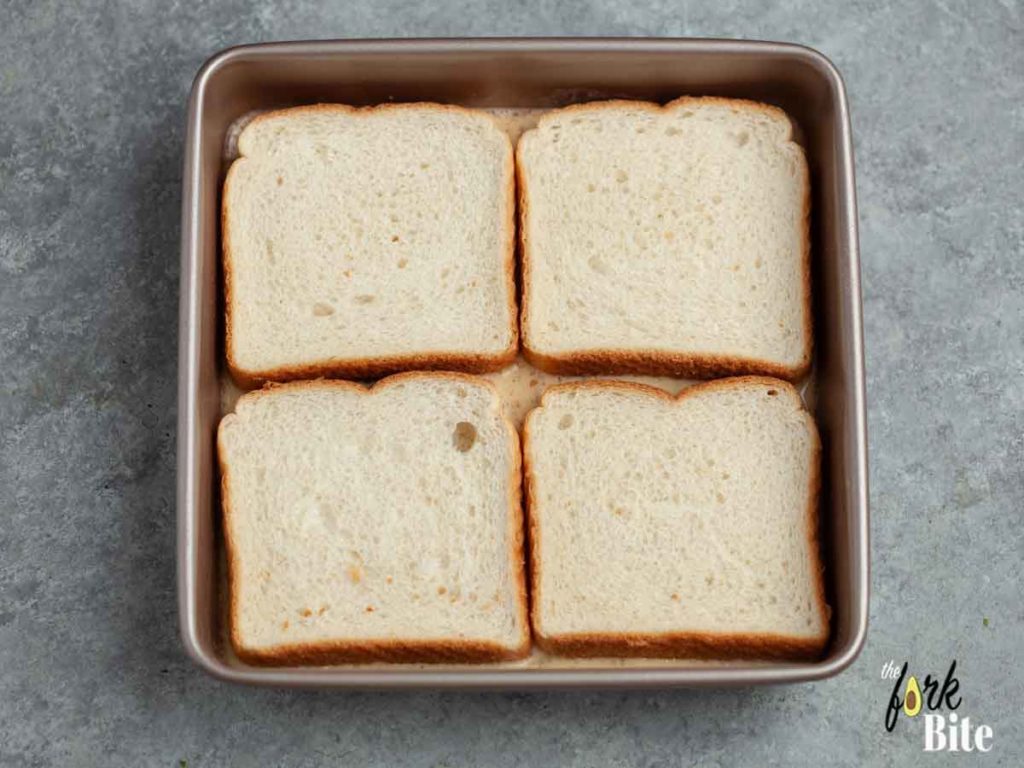 3 Place 2 cups of cornflakes in a resealable ziplock and crush the flakes with a rolling pin until coarse meals form.

Transfer to a pie plate or a bowl and add the sugar & cinnamon. (You can skip adding sugar if you’re using sugar-coated cornflakes). 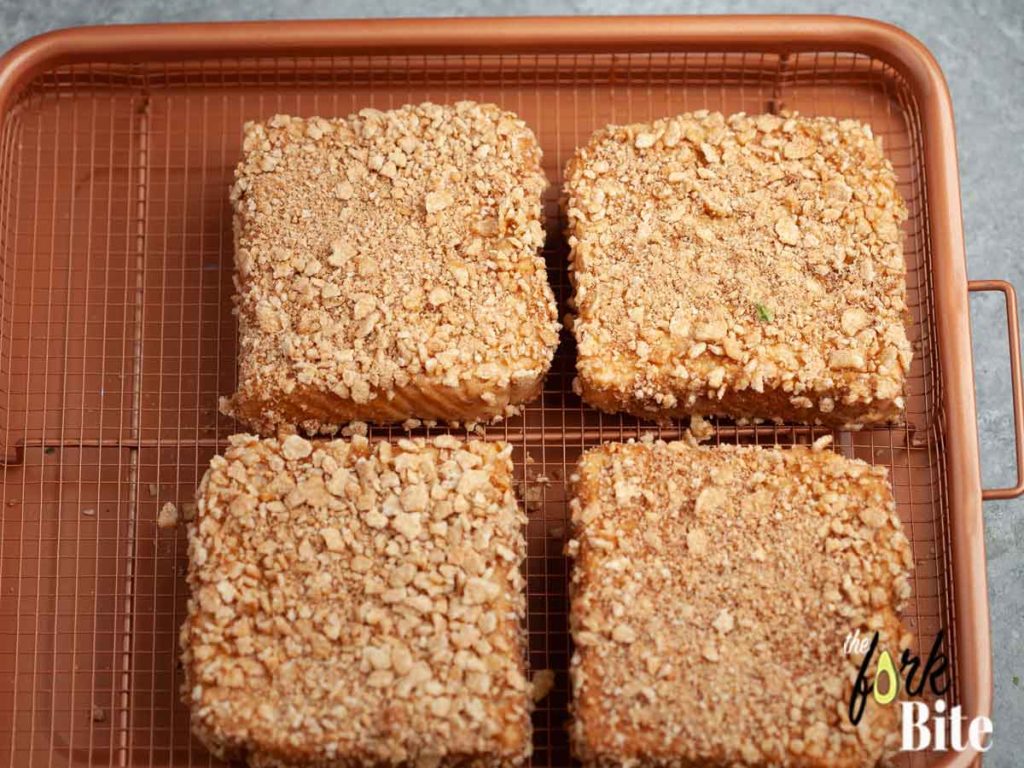 4 After that, place the soaked white bread in the cornflakes mixture bowl and coat well on both sides. Now, you can start heating the skillet or the griddle. Spray some oil and place a pat of butter.

5 Once the butter starts sizzling, you can put the bread and allow it to cook for a few minutes on each side until golden brown.

After all the bread slices have been browned in the griddle or skillet, transfer them to a cookie sheet for the next step.

6 Place in the oven and bake to 350°F (or 150°C) for about 5-6 minutes. We do this extra step to make sure that we cooked any egg that didn’t brown on the sides and to crisp up the topping as well.

Related Recipes for Breakfast or Brunch 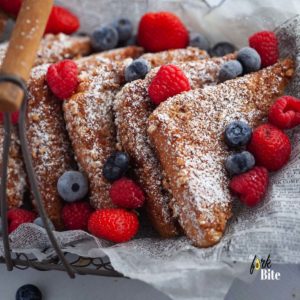 1.) You can use sugar-coated cornflakes or cinnamon flavor cornflakes. 2.) I used the Texas bread here but you can use Brioche or Challah bread which is ideal for French toast.