This saucy pork adobo instant pot is super easy to make. Loaded with garlicky flavors, its a great taco or burrito filling or simply serve it with white rice. Adobo is known as a classic dish in the Philippines, this dish has different versions based on the flavor preferences of each region. Even with this diversity, all versions have certain commonalities, which make it the recognized national dish of the Philippines.


With advances in culinary technology, even the most traditional Filipino dishes have quick versions already and one of them is Pork Adobo Instant Pot.

Adobo is an iconic dish. It represents the entirety of Filipino cuisine globally. You can always find it at the top of the list of Filipino foods, anywhere you can find one.

The saucy pork adobo dish is so popular that back in 2002, a movie called American Adobo was released. It was about five Filipinos residing in the US. The “Adobo” in the title showed the struggles and the character clashes of the characters.

Even if they didn’t agree all the time, their relationships with each other made them unified. It definitely depicted adobo as a dish. The contrasting ingredients mix in one pot, ending up with a delicious, hearty dish. 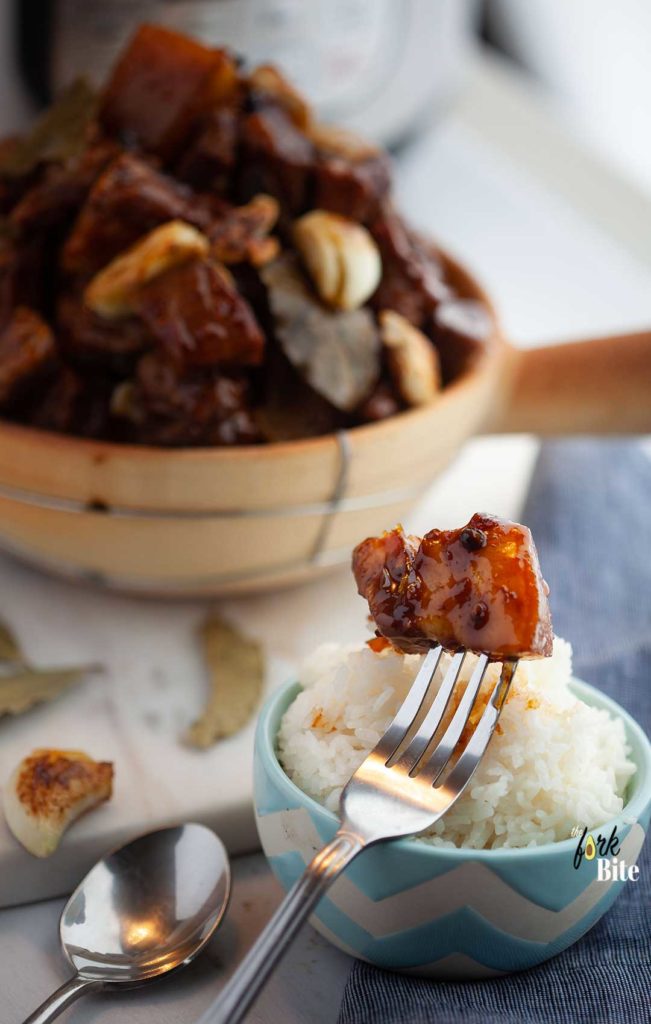 Technically, adobo is a technique of cooking vegetables or meat in a solution of peppercorn, soy sauce, vinegar, and onions. For fragrance, garlic and dried bay leaves are added.

It is a versatile viand that can use different kinds of meat. Even seafood, fish, and vegetables can be cooked the same way.

Almost every single Filipino adores this food. It is a dish anyone can carry around in a lunchbox or order at a fine dining restaurant. Every household has a different take on this recipe, yet all those versions have the same fundamental elements.

It is so essential to the Filipino family menu that it might be safe to say that it is the dish every daughter-in-law should master.

Adobo, in English, is vinegar-braised. In this dish, chunks of pork are browned in hot oil. The pork then braised in soy sauce and vinegar over low flame. The meat breaks down gently because of the moist heat.

By the time the dish is cooked, you have tender meat sitting in a thick, dark, flavorful liquid. It may be a lengthy cooking style but a truly fulfilling one. 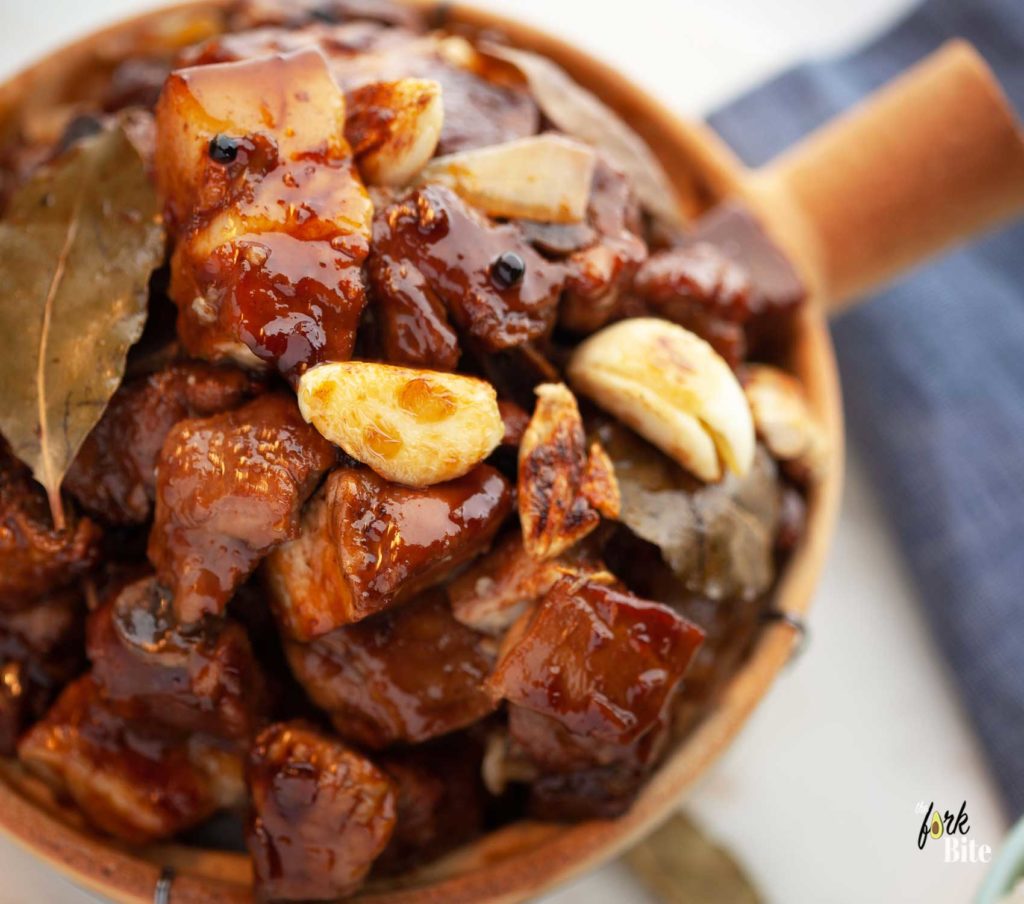 Filipino or Spanish? Derived from the word, adobar (Spanish), meaning “pickling sauce” or “marinade”, adobo was first recorded back in 1613 by Pedro de San Buenaventura. The Spaniard describes the dish as “adobo de los naturales” because it was similar to Mexican and Spanish viands that were called the same way.

The original name of the dish was never truly documented. He added that because of lexical imperialism, the Spanish moniker was retained. Bottom line is that Filipinos discovered adobo first. 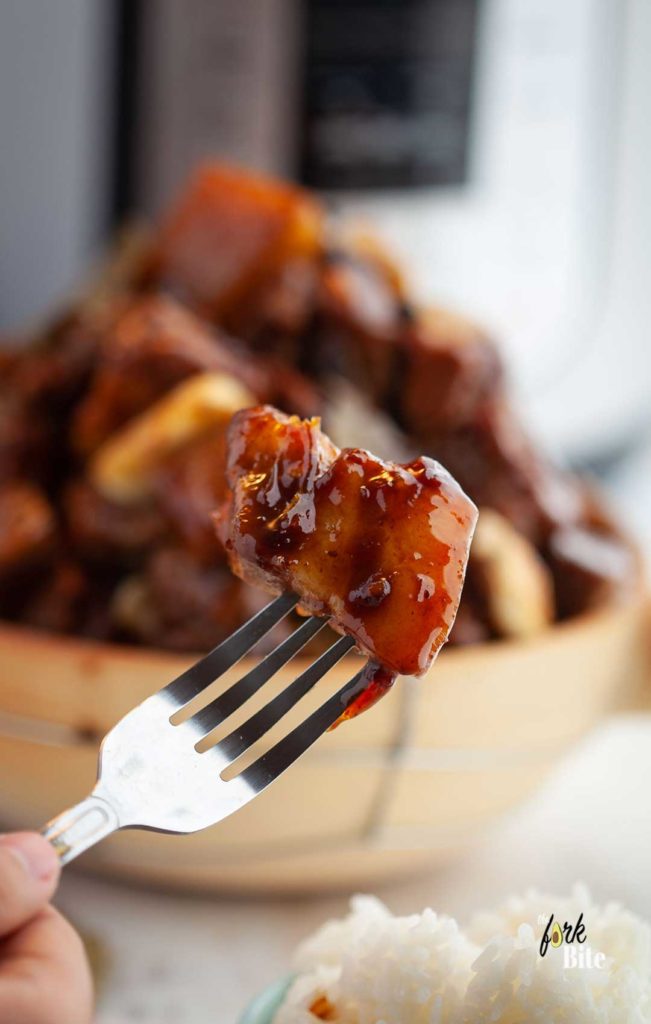 The Philippines has a warm climate, so if not cooked or preserved well, food is always prone to spoilage. Back then, the country’s natives came up with myriad ways to keep their food from going bad.

They made use of boiling or steaming, which used moist heat. They used abundant amounts of salt and vinegar, which were harmful to the bacteria that caused food to spoil.

Chinese traders, who long visited the islands, brought soy sauce to the ancient Filipinos. It then completed the ingredients for the Filipino nameless vinegar and soy sauce dish.

Though adobo was named after its Mexican and Spanish counterparts, it is still a unique dish. The sauce from Spain is heavily spiced with cinnamon, chili, and tomato paste.

Mexican adobo carries Mexican oregano, lemon juice, and cumin. The Philippine adobo dish is made almost entirely of vinegar, which flavors and tenderizes the meat at the same time. 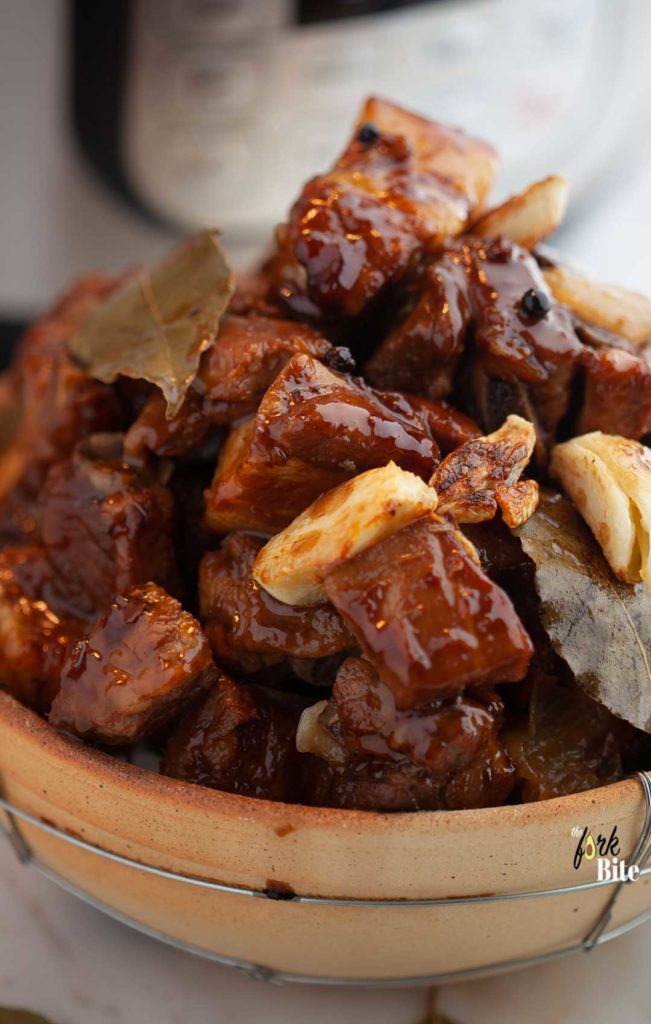 How to Make Pork Adobo Tastier?
This recipe is being made a little different. Even so, you will find out that people cook this viand according to their preferences.

Some like thinner, lighter sauce. Others take their time to marinate the pork before cooking the dish. I prefer to skip the marinating stage and just cook it two times. It’s a reversed braising technique. 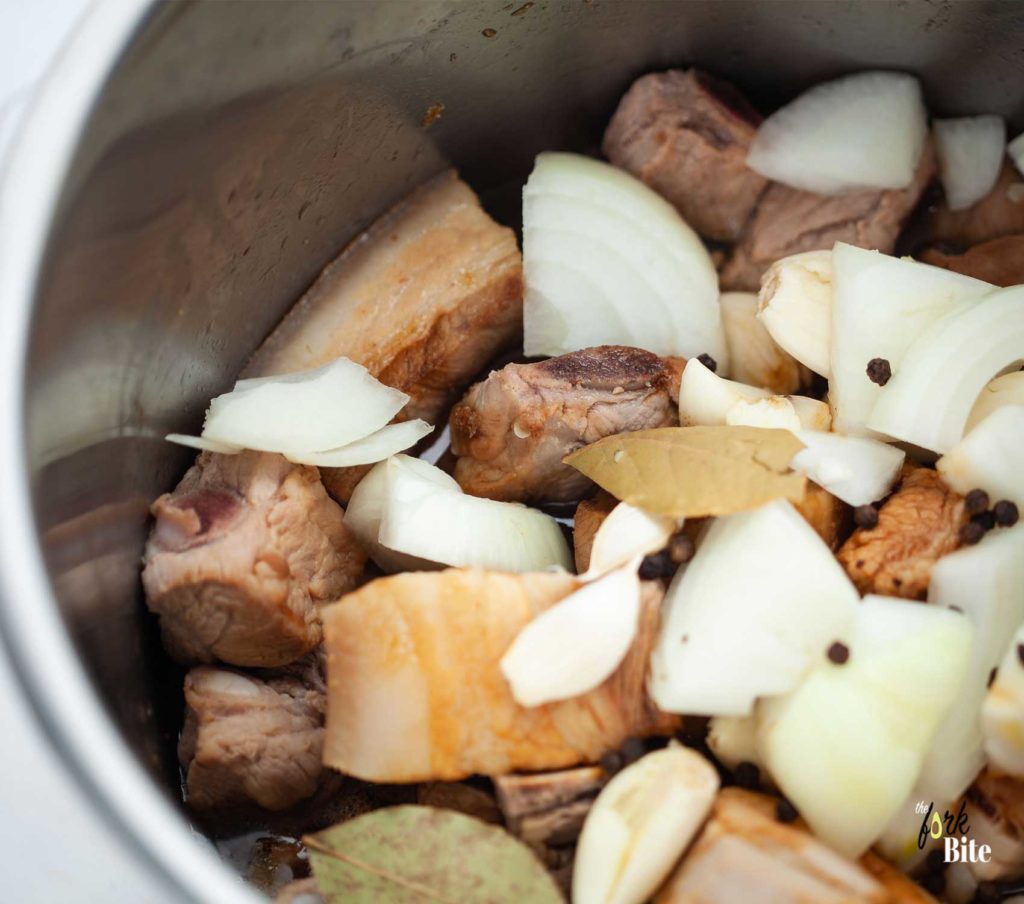 ① Cut ribs into 1 inch to 1.5-inch sections. Place in boiling water. Bring to a boil and blanch for 2-3 minutes. Transfer out and rinse under running warm water. Set aside to drain completely.

② Heat oil in a frying pan, then add the brown sugar evenly over low heat, don’t stir the sugar, just shake it occasionally. Once the sugar has melted and caramelized or turned golden, turn the heat up to medium and stir in the pork ribs. Turn off the heat.

③ Use a slotted spoon or tongs and transfer the pork into the Instant Pot, add the remaining ingredients. Set to “saute” setting and bring it to a boil. Don’t stir until the mixture boils for at least 1-2 minutes.

④ Now you can stir the adobo mixture and press “cancel” to switch off the “saute” program. Close the lid making sure the valve is on SEALING position and cook on “HIGH pressure” setting for 7 minutes. Note: Cooking time will vary depending on the cut and amount of meat. 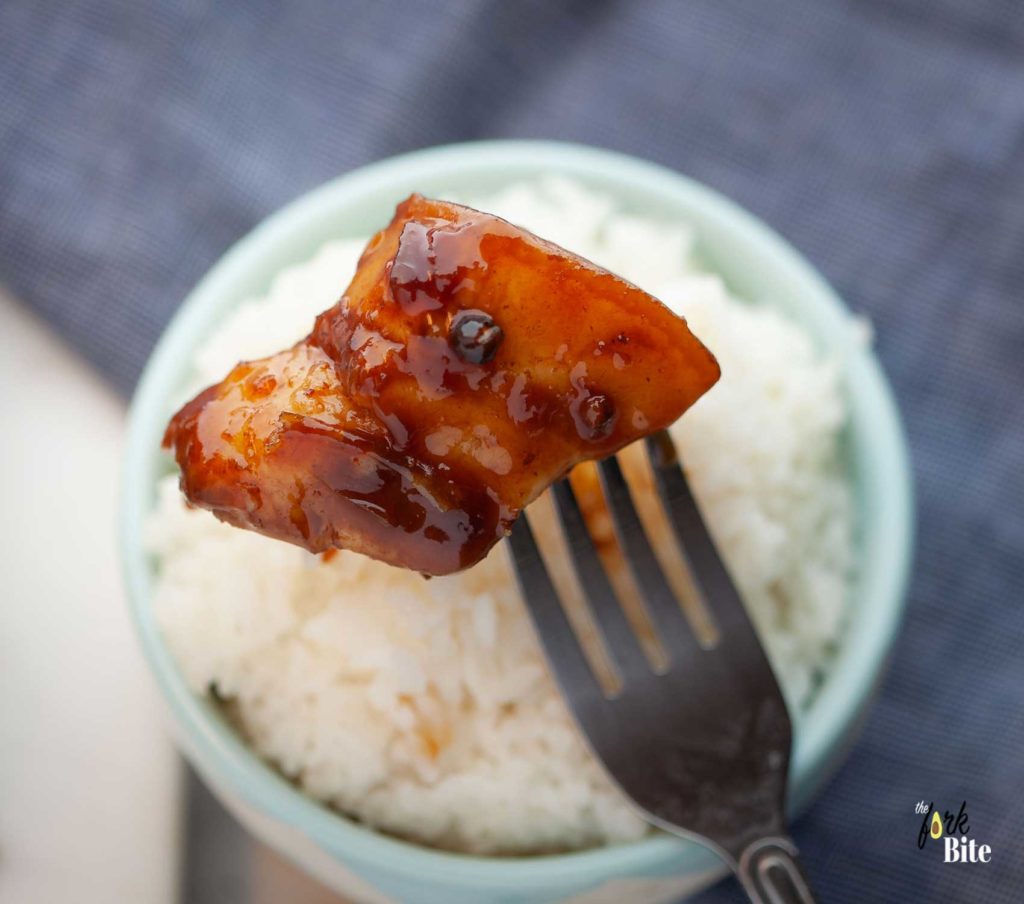 ⑤ The float valve will pop-up & the countdown begins. When cooking time is done,  “PRESSURE COOK” will no longer be lit and the display will show the elapsed time.

⑥ Do a quick release and let the pressure release slowly on its own before you open the lid.  Then, take the meat out from the instant pot and place them in a bowl. Press “cancel”.

⑦ Now press the “saute” feature on NORMAL setting and simmer the sauce for about 10 minutes or until the sauce has reduced or thickened and the meat comes out fork-tender.

⑧ Cancel the “saute” feature once the sauce has thickened. Pour the adobo sauce into the pork meat. Garnish with toasted garlic if desired. Serve with hot with steamed, white rice.

Instant pot pork adobo – which cuts to use? 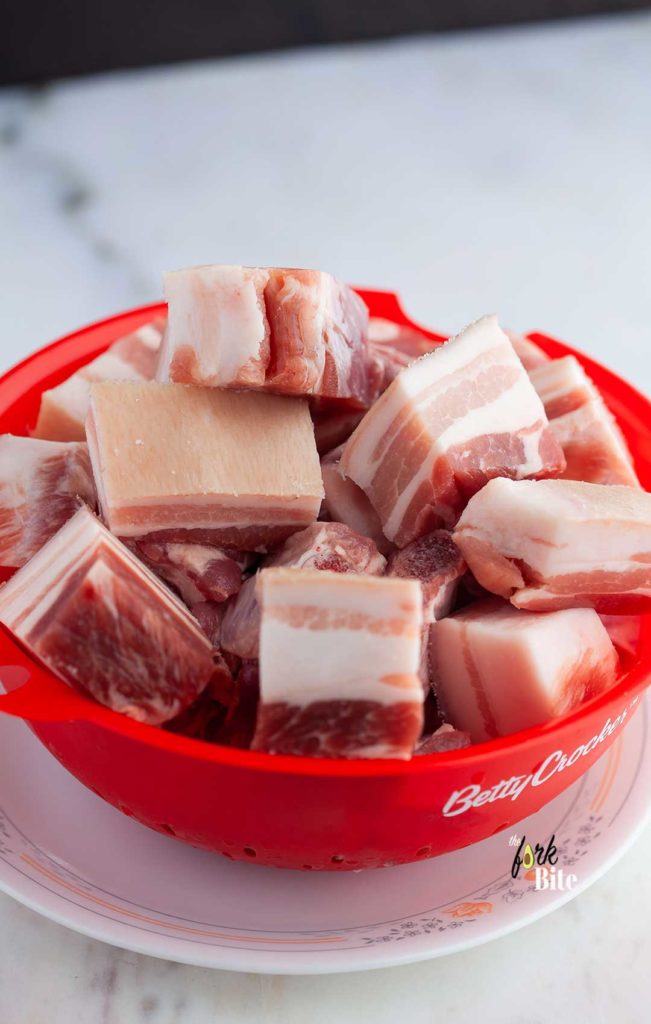 Chicken adobo may be more recognized internationally, but pork adobo is worth trying, too. If you’re torn between chicken and pork, then use them both at the same time.

Adobo will always be adobo, whatever meat or vegetable you decide to use. This super easy recipe would surely change the way you think about cooking this iconic dish.

How long does it last?

At room temperature, this pork adobo can last for 2 – 3 days, thanks to its high acid content. And if you store this in the refrigerator, the shelf life feels like indefinite – but I don’t think this dish will last for long once you served it on the table.

But the good news is, adobo does get better in time. This is a valid reason to cook an extra- large batch that will last throughout the week.

The many faces of Filipino pork adobo

Filipinos have always been resilient and flexible. These qualities are reflected in their food, particularly in adobo. The country is composed of many islands, so it’s natural to expect various renderings of this dish. Below are some of the popular dishes: 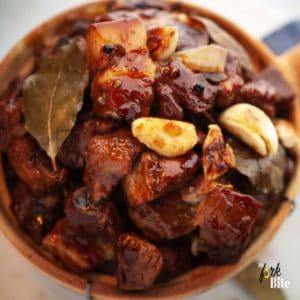 1. Blanching the pork ribs is an essential pre-treatment before proceeding to braise. Some pork ribs may have a strong gamey taste, and blanching can effectively remove the unpleasant taste of the pork. This process will not reduce the flavor since it takes only 3-5 minutes.